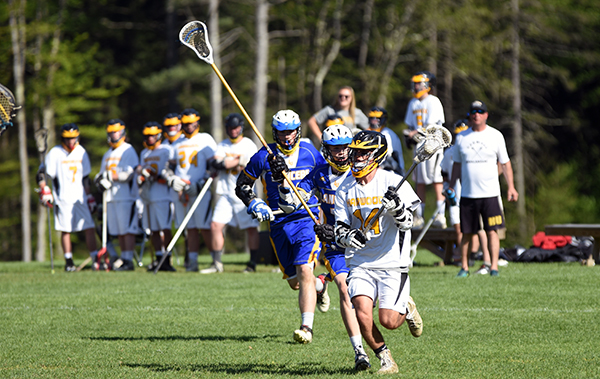 Monday, May 21, on Harwood’s home field, the varsity lacrosse team faced off against Lamoille in what would be a high-scoring game for the Highlanders. Highlanders coming into the game were on a hot winning streak that’s gone the entire season. Now 13-0, head coach Russell Beilke credits the success of his team to their indestructible defense and strong offense.

“Sully O’Hara might not have had a lot of saves, but he coordinates the defense very well,” said Beilke. With a score of 16-4, the Highlanders only needed five goals to clinch the win. Connor Woolley, who has recently made the achievement of 200 career goals, is now up to 211. “He’s having a phenomenal year,” said Beilke. “Ely Kalkstein is leading in scoring on the season and is on track to beating Woolley’s goals in a single season record.”

When asked what the team took away from the Lamoille game in order to prepare for their next matchup against GMVS, Beilke said, “We take away something from every game. We need to focus on third quarters and play the full game start to finish.” The boys’ lacrosse team over the course of the season is averaging 15.3 goals per game and allowing only 5.1 goals per game. They have won by an average margin on 10.2 goals every game.

The next game for the boys’ lacrosse team is Friday, May 25, home, facing off against local rivals GMVS.