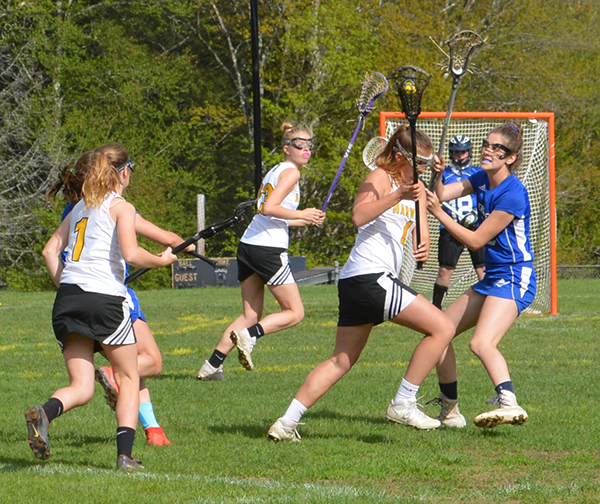 Harwood hosted the U-32 Raiders on Wednesday, May 15, in what would be a runaway game. Harwood came out early and was able to find the back of the net in the first half. Ely Kalkstein had six goals total, Jonathan O’ Brian had three, Jake Lynn had two, and Finn O’Hara, Jake Wells, Sawyer Simmons, Michael Aiken and Luke Spaulding all contributed one goal apiece for the victory.

“It was a good overall win for us; it was a good finish. The boys played hard. We were able to work on a lot of positive things,” said head coach Russ Beilke.

Harwood lacrosse traveled to St. Johnsbury on Saturday, May 18. The match had the Highlanders bringing home a big win, almost tripling their opponent’s points.

Due to field conditions, Harwood’s Monday, May 20, game was moved to Crossett Brook Middle School where the Highlanders hosted Milton. In a close match, the Highlanders were able to pull off a win with a mere three-goal lead to propel them further in the DII standings.

Harwood finished the long week of lacrosse with a great game against Lamoille on May 17, with the Highlanders on the road.

Lamoille took the lead early in the game with goals by Riley Cota, who had three, Morgan Burnham with four, Phoebe Loomis and Sophia Mas had two goals, and Addie Martin and Carrie Challet had one each. Harwood was down by five at the half and steadily worked their way back on the scoreboard.

According to head coach Hillary Wheeler, Harwood’s Erica Dow, Charlotte Cook and Kelly Tynan worked tirelessly on winning the draw controls. Goaltender Kaylee Cameron came up with 13 saves. Erica Dow had a season high four goals, Charlotte Cook had three, Kelly Tynan and Aliza Jernigan had two, and Anne Fennelly and Anna Kudriavetz each had one.

On Monday, May 20, Harwood girls’ lacrosse was on the road against the Stowe Raiders in a close match that had the Raiders ending strong.

Harwood goal scorers included Charlotte Cook and Anna Kudriavetz with two goals each and Abigail Scharges with one goal. Kaylee Cameron had 12 saves.

Harwood hosted Vergennes on Tuesday, May 21, where Vergennes would hold the Highlanders to a single goal all game. Kelly Tynan had Harwood's single goal, and goaltender Kaylee Cameron came up with 16 saves.

“We will recognize our six seniors with a final home game against GMVS on Friday, May 24, at 4:30. We have the girls’ youth lacrosse team from Mad River joining us for practice today at Harwood; both our JV and varsity players will be leading our next generation of Highlanders through some fun drills and games,” said Wheeler.

Harwood hosted Oxbow on Thursday, May 16, and the Highlanders were able to pull off a win in front of a home crowd.

Harwood’s Chris James went one for four with a double. Skylar Platt, Cam Joslin, Chase Reagan and Charlie Zschau all went two for four at bat, all singles. James pitched for the Highlanders and ended with two strikeouts.

Harwood traveled to Lake Region on Saturday, May 18, in a game where the Highlanders’ bats were slow to get in the swing of the game.

Harwood only had two hits the entire game but finished the game with zero errors. The assistant coach for Harwood, Tracy Holden, said Lake Region was able to hit where the Highlanders were not, and had seven hits total.