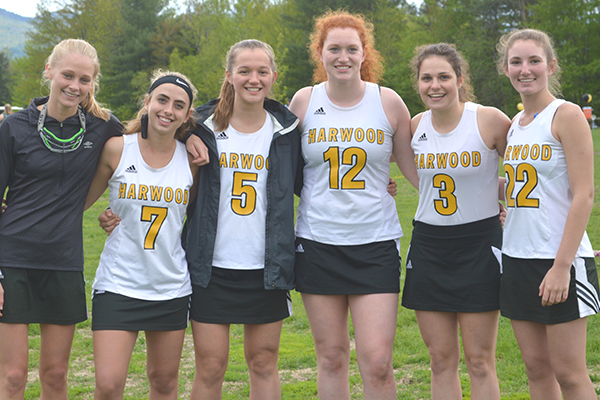 Boys’ baseball hosted Montpelier High School for their senior day on Saturday, May 25, for a fair-weather game.

Harwood tallied one at the end of the first inning in anticipation for their third-inning blowout when the Highlanders would score five. Maintaining a strong defensive front, Harwood was able to hold Montpelier to zero and score four more runs to end the game at 10-0.

In their last regular season game, the boys’ lacrosse team traveled to neighboring rival Green Mountain Valley School (GMVS) where they would end the season on a high note.

“It was a good test for us as we continue to grow as a team. We are looking forward to starting the next season and hoping to go very deep into the playoffs,” said head coach Russ Beilke.

Beilke commented that GMVS always puts on a competitive game and that the Highlanders maintained a strong defensive angle in the second half of the game. Jake Lynn for Harwood had a career-high four goals. Jake Wells also had a career-high three goals.

The head coach for the Highlanders, Hillary Wheeler, said that the six seniors contributed to the program in amazing ways this season. “The final game of the regular season at Harwood ended in a loss, but as a team we continue to look onward and upward, just into next week for playoffs. Our defense was anchored by Kaylee Cameron, who had a fantastic day in between the pipes stopping at least 25 shots. Cameron also had one assist,” said Wheeler.

Harwood’s Johanna Jarecki scored two goals. Anna Kudriavetz put one in the net as well as Aliza Jernigan with one in the final two minutes.

The first two innings were long, as Lamoille would get an early jump on the game, making their way around the bases with scattered hits and walks. The Lamoille pitcher threw accurate strikes and change-ups, tempting the Highlanders to swing at baited balls making for quick up at bats for Harwood.

Harwood was able to come back and score eight runs over the course of the remaining innings but not enough to catch up to Lamoille’s staggering lead.

Harwood traveled away for a doubleheader against Rice on Saturday, May 25, where the Highlanders would be held to a two-run game.

In their second game of the day, Harwood was able to get around the bases more but not enough to match Rice in what would be a runaway game.