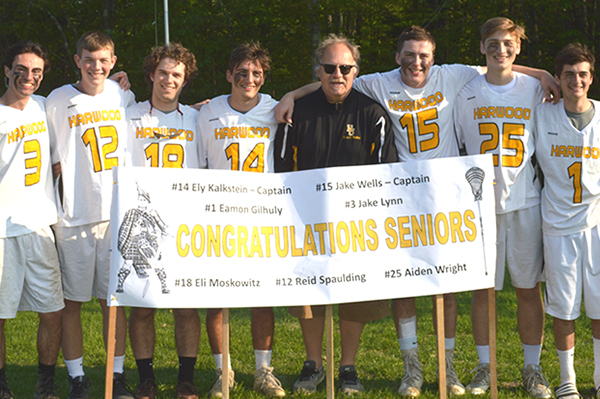 It was a bittersweet moment for parents who were honored with flowers as the crowded sideline snapped photos. The Harwood team worked hard to get the victory for the seniors and their families who served as the team role models and backbone in their four years.

Harwood came out ready to play, making light work getting the ball down the field in the offensive zone. With Harwood’s leading scorers on the attack, their stick-to-stick passes were unstoppable as they maneuvered around Lamoille defense.

Harwood was able to get on the board early and often, working the zone as they called out plays to one another cutting to and fro the crease area. After an established lead early on, players were able to pass the ball around and maintain possession for most of the game. Players were able to pinpoint the outer corners of Lamoille’s net, even getting fancy with behind-the-back shots that found their way into the net.

Ely Kalkstein, Jake Lynn and Jake Wells were lead scorers of the game, but the win was a whole team effort to maintain ball possession.

“The whole team played a great game and it was a tremendous amount of fun to see all those athletes on the field,” said head coach Russ Beilke.