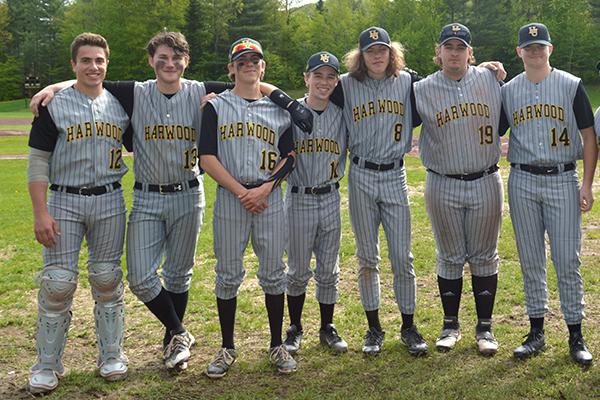 Harwood hosted Milton High School on Wednesday, May 29, for the Vermont Principals Association (VPA) DII playdowns. The Highlanders would advance to quarterfinals after a balk call on Milton’s pitcher would score Harwood’s winning run.

It would be a pair of goose eggs on the board for both teams until the third inning when Milton would score four runs. The next up at bat, Harwood would cut that lead in half, scoring two and holding a strong defense in the infield. In the fourth inning, Harwood would gain three runs as Milton would score a lone player across the plate. Tied 5-5 into the sixth inning with Harwood players on third and second, the home plate umpire called Milton on a balk, allowing Harwood players to advance one base, scoring what would be the winning run for a Harwood victory 6-5.

Harwood’s winning pitcher was Chris James, who pitched three innings and had four strikeouts. Harwood’s Chase Reagan went one of four at bat with a home run. Nate Peirce went two of four with two doubles. Skylar Platt went two of three with a double.

In the VPA quarterfinal game, fourth-seeded Highlanders hosted fifth-seeded Lamoille High School in what would be a Highlander victory.

Lamoille fans were up in arms as more than one call was overturned in Harwood runners’ favor. Scoreless until the third, both teams were able to get a single run on the board. Harwood would go on to score five runs in the next two innings, as Lamoille would be held to scoring a single.

After a close run game early on, Harwood was able to get the win over Lamoille to advance to the semifinals.

Harwood traveled away on June 4 to play against first-seeded Otter Valley Otters.

Otter Valley would open up the game with three runs in the first and a single run in the third. The Otters were able to hold Harwood at zero until the seventh inning when they would score one. Harwood’s Charlie Zschau went two of three at bat.

After a strong season of comebacks, the Highlanders were unable to get their bats behind them fast enough to regain any lost runs. Harwood ended the season 10-4.

Harwood would take over possession early in the game, making quick work of maneuvering around the Gumby defense. The Gumbys were able to get off fast shots, missing the net a few times but able to clear five goals.

Both teams worked their offensive zones, attempting to clear crisp passing cross field. The Highlanders were able to run the clock in the final quarter, clinching the win that would send them to the next round, winning 11-5.

No. 3 seed Harwood boys’ lacrosse team was on the road for the semifinal round of the Vermont Principals Association Division II playdowns against No. 2 seed Hartford on Tuesday, June 4.

Head coach for the Highlanders Russ Beilke said that it was a close game through the entire match. “It was a back-and-forth game; we had an 8-4 lead which they ended up tying in the fourth quarter.”

Senior Ely Kalkstein had four goals and two assists on the game and helped Harwood by putting the Highlanders ahead for the final time as he would find the back of the net with two minutes left, making the score 9-8. Fellow senior Jake Wells got the insurance goal in the remaining seconds of the fourth quarter, ending the game 10-8.

Finn O’Hara had three goals and two assists. Jake Wells had one goal and one assist. Mike Aiken and Jonathan O’ Brien had a single goal. Harwood goaltender Sully O’ Hara had 19 saves.

Beilke said he was extremely proud of the way his team played and is looking forward to going to the championship game for the third time in a row.