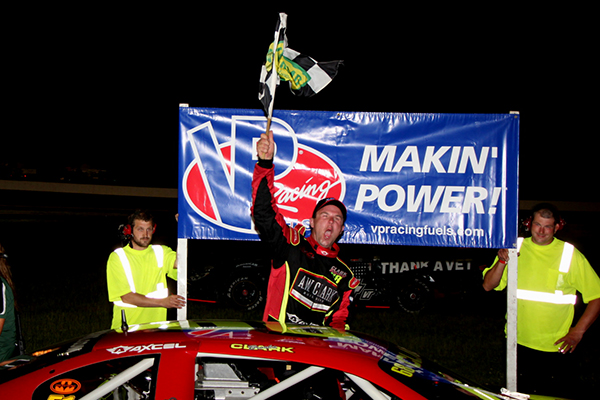 Fayston’s Brooks Clark took advantage of a late restart to grab the biggest win of his Maplewood/Irving Oil Late Model career at the 40th VP Racing Fuels Vermont Governor’s Cup on Thursday, July 18. Clark rode the outside around Barre’s Nick Sweet with just seven laps remaining in the 150-lap event to beat a stout field, which included NASCAR star Christopher Bell, for a career-defining victory.

While Clark started on the pole and led the first 43 laps, his road to Victory Lane was anything but clear sailing. Even while pulling away from most of the field early, the veteran had to hold off several early charges from outside pole sitter Marcel J. Gravel. The fiercest came following the third caution of the event on lap 36 after Bell spun while dueling with Kyle Pembroke for the ninth spot.

Clark was able to hold the lead each time while Sweet got underneath Gravel for the second spot on lap 41. When Stephen Donahue pounded the front stretch wall two laps later and collected Scott Dragon in the process, Sweet got the chance to work the outside on Clark. Sweet, who was a last-minute replacement for Eric Chase in the No. 40VT for the second straight week, made it work up high to move to the point.

Both Sweet and Clark pulled away from the field on a long green-flag run that followed with Sweet slightly faster. When the fifth caution flew on lap 96 after Jason Corliss cut a right-front tire, the lead duo embarked on a torrid duel that lasted more than 25 laps. Except for one circuit, Clark was able to use the outside momentum to stay ahead, until Sweet finally got back in front on lap 121 and cleared Clark two laps later. The four-time Governor’s Cup champion again began to pull away and seemed primed for a record-setting fifth victory in the event.

But Corliss shut down again to bring out the sixth and final caution on lap 143, setting up a seven-lap dash for the cup. Clark seized his opportunity, letting it ride on the outside groove and going back to the front. Sweet was unable to mount a counterattack in the final circuits as Clark captured his fifth career victory at Thunder Road.

Sweet finished second for the second straight week. Shelburne’s Trampas Demers held off Cody Blake for third, padding his points lead in the process thanks to the misfortune of Corliss and Dragon. Jimmy Hebert, Pembroke, Matt White, Phil Scott, Bell and Josh Masterson completed the top 10.

Barre’s Jason Pelkey also got the maximum from a late caution to score his second career Lenny’s Shoe & Apparel Flying Tiger win. Pelkey was running a distant second to first-year Tiger racer Danny Doyle when Kevin Streeter blew a right-rear tire and spun in turn one to bring out the caution with three laps left in the 40-lap feature.

The restart put Pelkey alongside Doyle, and Pelkey had the nose in front as the field took the two-to-go. At almost the same time, Mike Martin and Brandon Lanphear got into the wall while fighting for the third spot, and they eventually came to a halt on the backstretch. The lap was ruled completed, putting Pelkey on the inside for the green-white-checkered finish. Pelkey scooted away for the victory as Doyle got shuffled in the final corners and caused a scramble throughout the pack.

Northfield’s Cooper French became a first-time Thunder Road winner in the Allen Lumber Street Stock feature. The rookie went wire-to-wire in the 25-lap main event, holding off challenges from veteran Dean Switser Jr. of Lyndonville and sophomore Kasey Beattie of St. Johnsbury. The trio duked it out under a blanket following the second and final caution on lap 18, but French held strong to grab the breakthrough victory.

Thunder Road gets the crossed flags on the 2019 season Thursday, July 25, at 7 p.m. with the Country Camper Midseason Championships. All four divisions will be in action for added-distance features and double points. The annual driver autograph session is also scheduled.