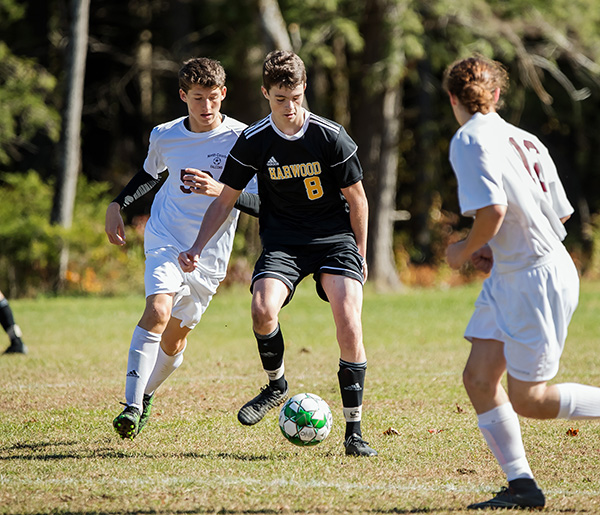 Harwood boys’ soccer faced off against Montpelier on October 16, when Harwood would earn their first goal in the seventh minute of the first half. The goal would be the game winner.

The first goal was scored by Gavin Thomsen on a pass from Cole Hill. Head coach for the team Joe Yalicki said his team did a good job of breaking up passes from Montpelier in the neutral zone. Yalicki said that his team could improve on playing smarter when they have the lead.

In preparing for playoffs, Harwood will be playing the first round against Lamoille on October 23, as The Valley Reporter goes to press. Harwood has been working on spacing and ball movements.

“I am happy about the regular season, but I want to focus now on one playoff game at a time. We have come together fantastically as a team but need to put all of our energy into winning the next game,” said Yalicki.

The first goal came late into the first half when Jordan Shullenberger found fellow teammate Cole Hill in the 21st minute. The Highlanders would take the 1-0 lead into the second half. Harwood would put the nail in the coffin in the opening minutes of the second when Gavin Thomsen crossed the ball to Shullenberger to get the 2-0 win.

Harwood matched off against Randolph on October 18. Harwood would go on to win three of their sets.

In playdowns, Harwood, seeded fifth, hosted VT Commons, seeded 12th. Harwood would go on to win three of the sets to advance to the next round that is to be determined.

In playdowns, No. 7 seed Harwood hosted the 10th seed Milton for the first round when Harwood would go on to beat Milton 3-1, taking them to the next level.