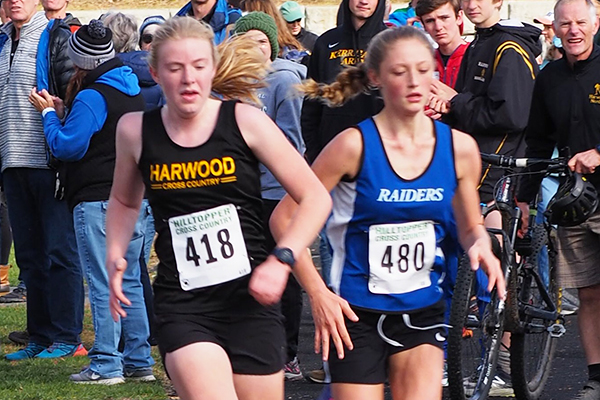 “It was a very close race. Britta was sandwiched between U-32 No. 1 and No. 2. U-32’s No. 3 runner nipped Caelyn at the finish. A slowly recovering Julianne Young managed to beat U-32’s No. 4 and freshman Jill Rundle saved the day by passing not only the No. 5 U-32 runner but she also passed the No. 4 U-32 runner at the finish line. It was very dramatic. “I know they (U-32) will be gunning for us at the state meet this Saturday in Thetford. It should also be a very close finish,” said coach John Kerrigan.

The Harwood boys’ cross-country team had a strong showing finishing third out of a field of 10 teams. The winning team was defending Division II State Champion U-32 and a solid St. Johnsbury team that competes in Division I. Harwood boys were led by Carlton Cummiskey (7). He was followed by Luke Groom (12), Ebbe Lillis (22), Vinny Spina (23), Jack Lamphere (33), River Collins (40) and Silas Yonkman (45).

Harwood JV boys and girls placed second in the conference championship. JV girls were led by Alex Pendo (2), Hadley Kielich (8) and Laura Martinez (10). “It was nice to see three of our JV girls on the podium,” Kerrigan said.

JV boys were led by Ben White (4) who had his best race of the season. He was followed by Holden Stephenson (9) and Rye MacCurtain (10). Again three JVs were on the podium for Harwood.

Harwood cross-country travels to Thetford Hill next Saturday for the state championships. Harwood girls have won nine of the last 10 years. They will be in a close battle with U-32 and Middlebury. Harwood boys are hoping for a top three finish.

“We are hoping we will have some fan support!” said Kerrigan.