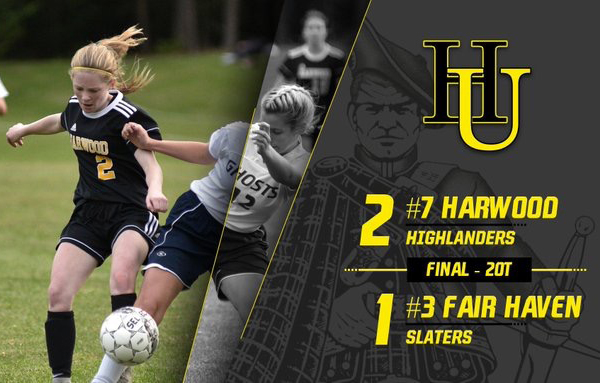 In the semifinal match that went into a double overtime between the seventh-seeded Harwood Highlanders and the third-seeded Fair Haven High School, Harwood was able to pull its second underdog win in the 2019 playoffs.

The October 30 game was hosted by Fair Haven on a cloudy overcast day. The Harwood girls’ soccer team had just come from a major upset win against the No. 2 seed Mt. Abe on October 26 and didn’t stop their forward momentum.

After a scoreless first half, Fair Haven would strike first by scoring the first goal by sinking the ball in the bottom left corner of the Highlanders’ net. Minutes later on the rebound, Harwood’s Tanum Nelson would sink a penalty kick to tie the game. The penalty kick was earned by teammate Emma Ravelin. As the minutes on the clock ticked down, the game, tied 1-1, would go into its first overtime.

There was 15 minutes on the clock for the first overtime, and neither team was successful in breaking down each other’s defense. As the end of the first overtime wore out, the teams regrouped for what would be a Hail Mary effort.

Expending all energy on the field, Harwood was able to break the ball successfully up the field. The ball would eventually get to Louisa Thomsen who would sink in the winning goal to propel Harwood to a Saturday, November 2, championship game.

When asked what the coaches felt after Thomsen sunk in the game winner, head coach Mike Vasseur said it was an amazing moment that had other Harwood teams who attended excited as well. “It was awesome to see the girls storm the field and the boys’ soccer team jump the fence to celebrate.”

“We just kept knocking on the door and pushing through until we scored. The team just kept working hard and believing in themselves,” said Vasseur.

In preparing for the championship game, Vasseur said that the team will reset and rest up.

The girls will play on Saturday, November 2, at 1 p.m. against ninth-seeded Rice Memorial at South Burlington High School.