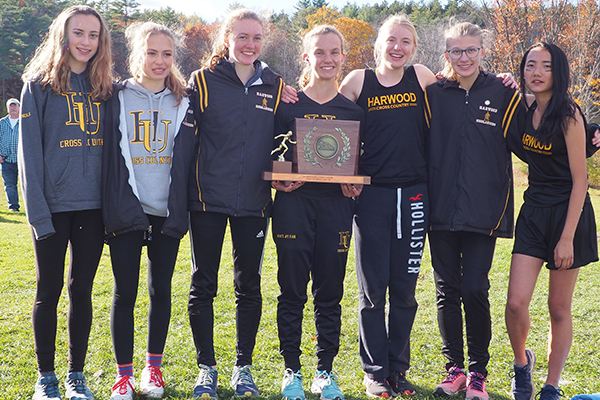 It was picked by several Vermont sports writers to be the race of the day, Harwood girls versus U-32 girls. The evenly matched programs went back and forth all season. The Harwood girls managed a very close victory at the last regular cross-country season meet – the NVAC Championship at St. Johnsbury.

“I knew they would be focused on us at states. The times that we lost to them or were very close there were two things in common,” said John Kerrigan.

“One – they blasted out a lead very quickly. Even though our girls ran the second half of the race faster than U-32 girls we did not catch them. At St. J they also went out like rockets and we narrowly caught them,” he said.

“Two – our freshman girls were not familiar with the course. They were stressed as to when was the next turn, how long to the finish, etc. None of our freshman girls had run at Thetford. Enter team captain Julianne Young. Julianne suggested that the team visit the Thetford course on the Tuesday before the state championship. The girls were able to familiarize themselves with the layout of the state meet course while running a relaxed pace. It was a very wise decision by Julianne,” Kerrigan continued.

“At the state meet we knew they would start fast again. Our girls showed great discipline. Though the first mile was much faster than they were used to and were uncomfortable starting with such a fast pace, they hung on to the U-32 girls like Japanese beetles on a rosebush. In the last mile each HU girl surpassed her target U-32 runner,” he said.

Freshman Charlie Flint finished 19th at the conference championship and 10th at the state meet.

“Go figure. One could say she had a great race at Thetford. Charlie is only the sixth girl from Harwood to qualify individually for the New Englands during her freshman season,” her coach said. The New England XC Championships will be held in Manchester, CT, on November 9.

It was Harwood girls’ 10th state championship in 11 years. The victory was achieved with team leadership and spirit shown by their team captain, Julianne Young, the coach said.

Thurston’s time of 19:19 was almost a minute faster than MegAnne Gilmore of Lamoille who was the state champion in the 3,000 meters in track. Her time was also faster than any other female runner in the state.

Placing them second overall in Vermont also rewarded their efforts. Only two-time defending Division 1 CVU girls finished ahead of them. Harwood girls qualified as a team for the New England Championships on November 9.

In addition, three members of the Harwood girls’ team – Ava Thurston, Britta Zetterstrom and Charlie Flint – qualified individually for the New England Championships by having one of the top 25 times in the entire state. With this victory, Harwood girls have now tied Harwood boys with 13 state championships each.

Harwood boys also had an individual qualifier for the New Englands. Carlton Cummiskey finished eighth in the Vermont Division 2 meet. His time of 18:00 minutes was fast enough to get him in the top 25 overall. He was followed by Vincent Spina (23), Luke Groom (28), Ebbe Lillis (33) and Zennor Di Mario (38), giving the team a fifth-place finish.

“It was not a good day for us. It was only the second time in 22 years our boys failed to finish in the top three in the Division 2 state championship. But we are a young team and I know we will improve and return stronger in 2020,” Kerrigan sai