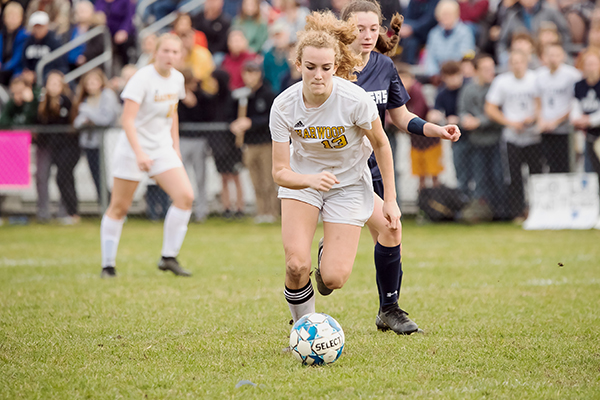 After a 2-1 overtime semifinal win against Fair Haven on October 30, the Harwood Union girls’ soccer team lost the state championship to Rice 1-2 on November 2.

In the Division 2 state championship game, Harwood got on the board first but was unable to hold off the Green Knights.

Harwood scored the first goal of the game when Tanum Nelson netted a penalty kick past the Knights. Harwood would hold the lead until the second half when Rice would tie the game and take the lead in the 50th and 52nd minute of the game. Rice would hold off the Highlanders for the remaining minutes to win the title 2-1.

“I thought we played very well and had our opportunities. We had our chances but it would have been nice to beat the keeper with some of our shots. Rice’s keeper played the game of her life,” said head coach Mike Vasseur.

Nine Highlanders are seniors and will be graduating. Vasseur said he will miss the leadership and intensity that they brought to the team.

His final thoughts on the season: “I thought we really played well in playoffs and improved over the season. The girls should be very proud of making it to the championship. We finished the season a much harder more competitive team.”

The October 30 game was hosted by Fair Haven on a cloudy, overcast day. The Harwood girls’ soccer team had just come from a major upset win against No. 2 seed Mt. Abe on October 26 and didn’t stop their forward momentum.

After a scoreless first half, Fair Haven would strike first, scoring the first goal by sinking the ball in the bottom left corner of the Highlanders’ net. Minutes later on the rebound, Harwood’s Tanum Nelson would sink a penalty kick to tie the game. The penalty kick was earned by teammate Emma Ravelin. As the minutes on the clock ticked down, the game, tied 1-1, would go into its first overtime.

There was 15 minutes on the clock for the first overtime, and neither team was successful in breaking down each other’s defense. As the end of the first overtime wore out, the teams regrouped for what would be a Hail Mary effort.

Expending all energy on the field, Harwood was able to break the ball successfully up the field. The ball would eventually get to Louisa Thomsen who would sink in the winning goal to propel Harwood to a Saturday, November 2, championship game.