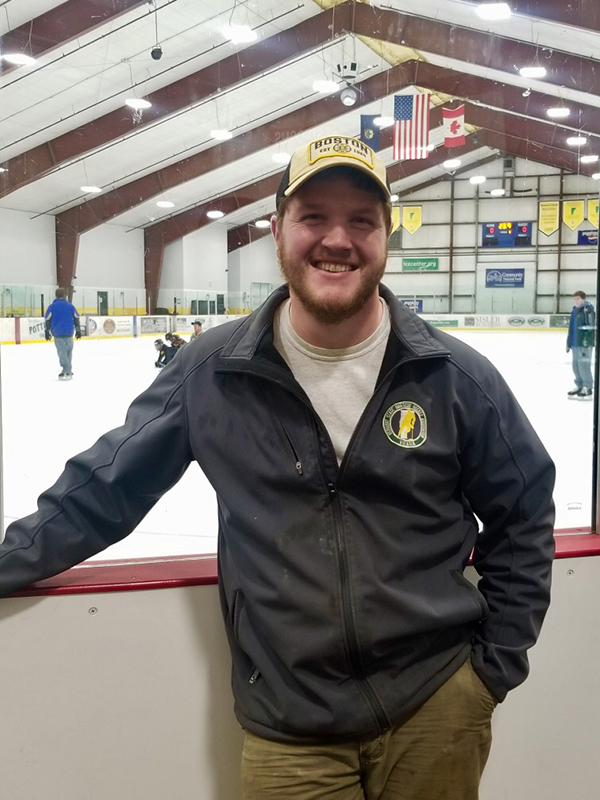 Grout was a three-year varsity hockey player for Harwood and played under the long-standing coach Dave Morse. Last year Morse’s son, Shaun, took over the program that he had been an assistant to for many years. Grout will take over this year and is still in the process of naming an assistant coach.

Grout has been playing hockey for 20 years, lacing up his skates for the first time when he was 9 years old. After high school, Grout started coaching youth hockey at the Ice Center of Washington West in Waterbury where he coached at the Bantam level for six years.

When asked what his favorite thing about the game is, Grout said the rink atmosphere. “There is nothing better than the roar of the crowd for a big hit, great goal and great play. Players feed off it and, truthfully, so do the coaches,” said Grout.

Grout added that he is hoping to bring a fresh look to the game of hockey for the players. “I hope to bring a new-age style of play with an old-school, hard-nose hockey twist. I have very high hopes for this team!”

Grout said that the number of students trying out this year is still fluid, but he estimated nearly 20 kids will be trying out for the team. Currently, the season hasn’t started yet, but the team is still holding captain’s practices where Grout can watch the practice from the snack bar and watch the players interact with each other.

With Grout coming back to coach a program that he had been a part of, this Valley Reporter writer asked him what he took away from his own high school experience, and then as a coach, to apply to this season. “I always pinned myself as an average player. I never would think I could play past high school. However, after I graduated one of my old coaches, Charlie O’Brien, convinced me to try out for a junior hockey team. I made the team, but due to certain circumstances I couldn’t accept the contract to play. So the main thing I take away from my playing career as a player and coach is to push the athletes beyond what they think is possible and help them through life after they leave the team,” he said.

The boys’ first scheduled game on the ice is the Burchard Tournament at Leddy Park in Burlington on December 13 at 8 p.m.