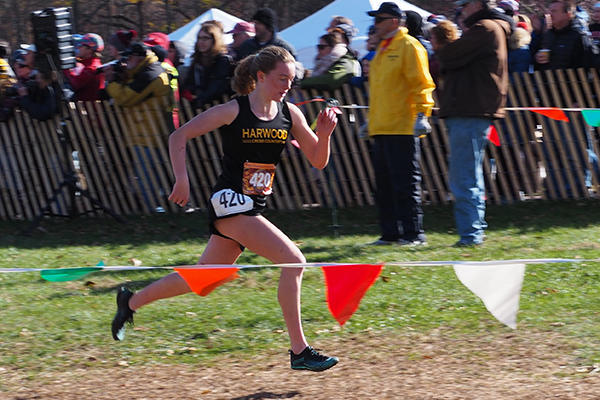 Ava Thurston established herself as a regional star on the New England cross- country stage. This past Saturday at Wickham Park in Manchester, Connecticut, she placed a very impressive fifth place.

“Ava ran a very smart race. She held back the first mile (20th) and slowly started to pick runners off. She made a move on the largest hill (Green Monster) on the course just before the 2-mile mark to move into the top 12,” said coach John Kerrigan.

“With 800 meters to go, Ava was moving like a train pulling out of the Waterbury station,” Kerrigan said. She passed seven other runners to place fifth. The only girls that beat Ava have impressive resumes. In first place was Sophie Matson of Falmouth, Maine (14th in the nation in 2018). Second was Mari Noble of Greenwich, CT, the Connecticut state champion. In third was Kate Wiser of Pomperaug High School (Southbury, Connecticut), who was 2018 New England champion, and in fourth place was Chloe Trudel, the New Hampshire state champion.

“I was gaining on Chloe the last 200 meters. If only I had started my kick earlier I may have had her,” said Thurston. “Having the rest of the Harwood girls’ team to train with the last two weeks and knowing that they were running behind me helped a lot,” said the Harwood sophomore.

Advertisement
he New England XC Championships for girls since 1997. They finished a 18th – just ahead of Rhode Island powerhouse LaSalle Academy. They were the second Vermont team to CVU (first place).

“It was a very impressive race for both Ava and our team of girls. Previous to Ava’s finish, the best a Harwood girl had finished at the New England’s was 27th (Kim Blodgett of Moretown in 1988). Stacey Smith of Waitsfield was 29th in 1989 and Olympic Nordic skier Caitlin Compton of Warren was 31st in 1997. It is even more impressive considering our previous best individual and team results were prior to Connecticut entering the New Englands (2002),” Kerrigan recalled.

“And our 18th-place finish – best ever in the post-Connecticut era – occurred with four freshmen and three sophomores!” he continued. Harwood had to make a last minute replacement for Julianne Young who was diagnosed with a stress fracture just after the state meet. “My heart went out to Olivia (Sprague). She was a freshman running in her first varsity race ever and at the New Englands. “Olivia held her own in her very first varsity race beating about two dozen runners,” he said.

“The CVU girls placed first giving us a great measuring stick for next year within our own state boundaries,” said Kerrigan. Hall of CT followed CVU; Concord, NH, was third; East Greenwich, Rhode Island, was fourth; Trumbull, CT, placed fifth; and Simsbury, CT, was sixth. “Our 18th place (in the 30-team field) was solid. Especially when you consider we were the youngest team with the smallest school population, from the smallest New England state!  Hopefully with such a young team, we can be up there with those Connecticut teams next year,” said Kerrigan.

Carlton Cummiskey represented the Harwood boys and placed 217th. “I caught a cold earlier in the week and it took its toll today. I will be back next year, said the Harwood junior.

A video of the race can be viewed at www.youtube.com/watch?v=79Tc0NoICTw&feature=youtu.be&fbclid=IwAR1WqOTXpe7iK3V-zPxii8n9A5MkldIjZ_krn50XFHYm6v1ZYg_gg3XExlQ and all results can be seen at www.athletic.net/CrossCountry/meet/159593/results/701136.