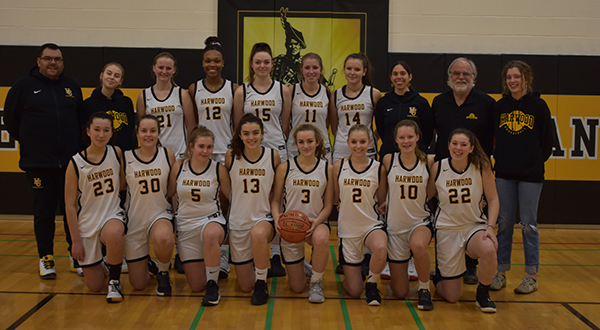 It took four years to achieve something that the Harwood Union girls’ basketball team hadn’t achieved in the last four decades: a Division 2 championship!

“This wasn’t just a season. These girls have been working for four years to achieve this,” said Harwood Union girls’ basketball coach Tom Young after the girls won the semifinals in Barre last week, defeating North Country 47-27 on March 11.

The Vermont Principals’ Association first postponed and then canceled the finals, only to later declare that both Harwood and Fair Haven were Vermont Division 2 co-champions for 2020. However, in the eyes of their community and The Valley Reporter, the members of this team are champions and the community could not be prouder.

Here’s a look at the women on the team and a few words from the coaches who got them where they are. Head coach Young along with assistant coaches Melody Frank and Greg Titus each played a specific and unique role in getting the girls to the championships this year.

Young, who started coaching the team four years ago, said that he saw their potential and how hard they were willing to work. He said he used an academic model to build what he called a “classroom culture” to train the team.

The team spent some time training last summer in Ukraine with Project Harmony. When they began doing open drills in the gym this fall, Young worked with them on documentation and asking them to define what they wanted from their teammates, parents and coaches as well as some bigger things, like how to handle drama and conflict with each other.

While Young worked with the team on life skills and drills, assistant coach Melody Frank worked on some very specific things.

“Tommy brought me on two years ago to work on increasing shooting and dribbling and teaching them the ability to understand the basics and fundamentals of each skill. He’s an expert on the big picture and he brought me on both as a female voice for the girls but also to key in on shooting style and form. We worked a lot on form in the summer and off season,” Frank, a former college basketball player, explained.

Frank spent a lot of time with the team on very specific things like improving outside shots, having forwards work on dribbling, getting to the top of the key. She ran the plan for offense while Young worked on defense.

“As he said a few days ago, it was the best defense we’ve ever had and the best offense because we could both work best at what we did well,” Frank added.

With Frank and Young working with the team on the court, assistant coach Greg Titus was working as a scout.

“I started with Tommy four years ago. I scout upcoming opponents and watch their games,” he said and explained that he brings that intel back to Young and Frank to work into their practices and drills in advance of an upcoming game. He also helps with running drills and made most of this year’s games.

“We really wanted to finish in the top four seed so that we’d get playoff games at home and then get to go to the Barre Auditorium. It was an amazing season. We had a couple of setbacks along the way, but when we had a big game the team stepped up. It was really a result of the team’s confidence growing and the team getting better,” Titus said.

All three were thrilled by the community support for the team and how many turned out for both home and away games.

“I’m impressed by who they are as young women and it’s been so amazing to see 300 to 400 people come watch them at a home game. That doesn’t happen enough. I loved the passion on their faces when they won the semis. We lost every game four years ago!” Young said.

“This was monumental. It was an epic experience to see what the girls have done and watch them establish that Harwood Union is for real and was dominating throughout the plays, showing everyone that we’re absolutely here to stay. To see the girls’ joy and elation and pride was incredible. I had to take a moment and take it in and be in awe,” Frank added.

Mia Cooper is a senior this year and has played on the varsity team since her sophomore year and has been a center forward since she was 9 years old. Her mother forced her to play basketball for the first three years that she played. She didn’t love being in the middle of the gym, with everyone’s eyes on her. What she loves most about playing now, is her teammates. They have grown so much as individuals and as a team in the past three years. During Cooper’s sophomore year she was recognized with an honorable mention and in her junior year she received a first team all-state nomination, as well as being chosen for the Dream Dozen, which is made up of the 12 best underclassmen in Vermont. This year, she was chosen to play in the North vs. South senior game. She has committed to playing basketball next year for Guilford College in Greensboro, NC. She splits her time between living with her mother, Lisa, and younger brother, River, in Waitsfield, and her father, Aaron, in Van Wert, OH.

Ashlyn Carst is a senior who has been playing on the varsity team for three years now, since sophomore year. She loves being part of a team and being able to stay healthy and fit while having fun. She made most of her best friends through playing basketball. They don't all play anymore, but she said she’s met so many people through the sport. She loves her teammates and started playing basketball when she was in first grade in Pennsylvania. She has played ever since then. She’s a forward, so she plays down low. She lives in Granville with her siblings.

Kennedy Wimble is a senior and a guard. She’s been playing since first grade and played all through Thatcher Brook, Crossett Brook and Harwood. In ninth grade she started in AAU for the Highlanders with Young and was a swing player between JV and varsity her sophomore year, playing varsity for the last two years. She considers the basketball team a big part of her family and loves how team members supported each other, always having each other’s backs. She said she could not have asked for a better team to be a part of and she’ll cherish every memory. She lives in Waterbury with her mom, Dawn, and dog, Aly. Wimble is in the early college program attending Norwich University in the nursing program and plans to pursue a career as a nurse practitioner.

Ella Gannon is a senior at Harwood and is a starting forward on the basketball team. She lives in Waterbury with her parents and two dogs, Bandit and Kipper. She’s been playing on the varsity team for three years now, having started playing basketball in eighth grade as a forward or post player. When she started, she didn’t know anything about basketball and was really anxious about it, but there was a great need for more girls to make it possible to have a team so she decided to give it a shot. She said she is generally pretty shy, but being on the court with everyone cheering for her made her a more confident person and player. She loves basketball because it taught her to try new things and step outside of her comfort zone.

Ashley Proteau is a junior captain who lives in Duxbury with her two older siblings and parents. She started playing basketball in first grade and has loved the game since. She’s been the starting point guard on varsity since freshman year. She loves how selfless and team-oriented the game is and how much effort the team and coaches put in to achieve a common goal.

Emilee Semprebon, a junior, has been playing basketball since first grade. Joining the varsity team as a sophomore she plays as a guard/forward. She lives in Waterbury with her two siblings and parents. The thing she loves most about the game is the family aspect of the team and how everyone always has her back no matter what.

Ellie Odefey is a Harwood junior from Waterbury where she lives with her parents and younger sister. She started playing basketball in third grade, took a break and rejoined the game in eighth grade. This is her first year on the varsity team as a forward. She loves the teamwork aspect of the game and the positive dynamic of the team.

Sarah Bartolomei lives in Waterbury Center and started playing basketball when she was in fifth grade at Crossest Brook. She’s a junior and has been on varsity for two years now. She plays mostly at forward and sometimes center. She loves basketball because of how fluid and fast paced the game is. In addition to enjoying playing, she loves being a part of a team and working together with people who love the same things she does.

Morgan Longe is a junior and this is her first year as a varsity player. She started in fifth grade as a guard. She lives in Waterbury Center with her parents and a sister. What she loves most about being on the team is the drive to succeed in the game and in life.

Alivia Powers, a junior, has been a forward on varsity for a year. She loves how no matter what is going on outside of basketball for anyone, when the team comes together it feels powerful knowing they all have the same goal and will support each other to get there. She started playing basketball in third grade for another way to be active and has loved it ever since. She lives in Warren with her parents and four siblings.

Emma Ravelin is a 10th-grader from Duxbury who has been on the varsity basketball team since her freshman year. She loves being a part of a team and working together toward the same goal. She started playing basketball in first grade and currently plays point guard. She lives in Duxbury with her mom, stepdad and three siblings.

Tanum Nelson is a sophomore who lives in Duxbury with her parents and siblings. She’s been playing varsity basketball for two years. She loves the feeling of winning, not just because of the end result but because of all the hard work it represents on behalf of herself and her teammates. She played youth basketball from a young age until fifth grade when she stopped playing. She started again in her freshman year at Harwood. She plays guard.

Jaye Fuller, Waterbury Center, plays forward and this was her first year on the varsity basketball team. She had the chance to play every position on the court, but this year she played forward, which is where she feels the most confident and comfortable. As the youngest of her siblings and the child of two basketball-minded parents, she’s been playing basketball since she could walk. She started playing for her school in first grade, and now as a sophomore, basketball has grown to be her favorite sport. She said that basketball pushes her to be the person she wants to become and that the team is always encouraging each other to reach a common goal.