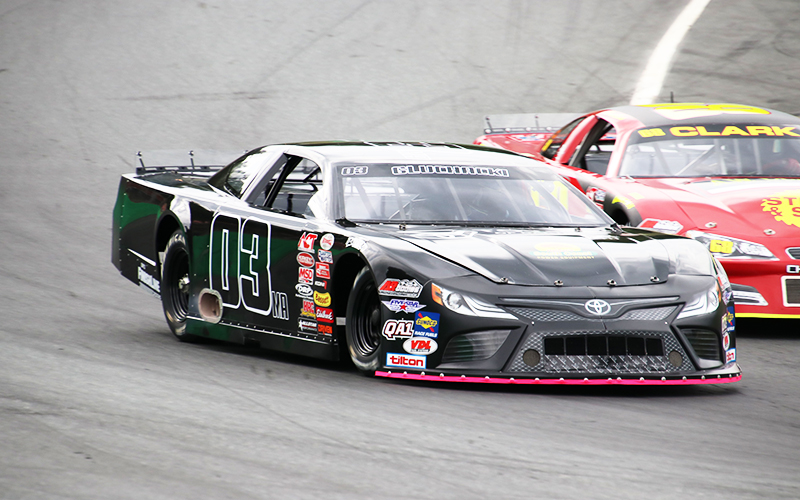 The American-Canadian Tour (ACT) makes its first trip of the year the Barre, VT’s Thunder Road this Sunday, July 26. The Community Bank 150 is the start of a busy stretch in mid-to-late summer where the bulk of the ACT season will be decided.

The combination of the worldwide COVID-19 outbreak and a weather postponement has meant a slow start to the 2020 ACT Late Model Tour season. As the calendar nears the end of July, just two ACT Tour events have been held, leaving many racers antsy to get going. The Community Bank N.A. 150 was originally scheduled for early May and was recently reslotted on the schedule after a separate postponement at Seekonk Speedway.

However, beginning this Sunday, the season finally hits high gear. The Community Bank N.A. 150 kicks off a stretch of six events in eight weeks that also includes the $10,000-to-win Midsummer Classic at White Mountain Motorsports Park, the Labor Day Classic at Thunder Road, and a spot on the Full Throttle Weekend program at New Hampshire Motor Speedway.

With more than half the point-counting events for the season in this stretch, racers and fans alike will get their fix while also seeing who the ones to watch are for the championship. Drivers such as Jimmy Hebert, Wayne Helliwell Jr., and Ryan Kuhn who are off to strong starts look to ride the momentum through the summer heat. Meanwhile, defending champion Rich Dubeau, Chris Pelkey, Tom Carey III, and Alby Ovitt will try to build some momentum of their own.

Sunday’s event is the 74th visit to Thunder Road for the ACT Late Model Tour since the series was founded in 1992. In recent years, locals who consider Thunder Road their “home” have largely held serve, with Vermont-grown drivers such as Jason Corliss, Scott Payea, and Nick Sweet pulling down multiple victories. Their success has showed how important experience is on the one-quarter-mile high banks.

However, the ACT interlopers can and have stolen the show. Last September at the Labor Day Classic, it was Plainfield, NH’s, Dubeau taking a surprise victory that all but cemented his first ACT championship. That win broke a string of three straight victories by reigning “King of the Road” Jason Corliss.

Knowing how big a role the track plays in the series, other Tour drivers less familiar with the “Nation’s Site of Excitement” are already making the effort to improve. Four ACT regulars — Wayne Helliwell Jr., Bryan Kruczek, Ryan Kuhn, and Derek Gluchacki — traveled north for last week’s Vermont Governor’s Cup 150. Kruczek is reportedly making a return visit this Thursday for the Midseason Championships.

This experience will go a long way towards outrunning drivers who have spent years, even decades, calling Thunder Road their stomping grounds. Current ACT point leader Jimmy Hebert of Williamstown, VT, is a former Thunder Road Flying Tiger champion and Late Model Rookie of the Year. He’s posted multiple runner-up finishes in ACT competition at the track and seems long overdue for a win.

Dubeau; Hinesburg, VT’s; Bobby Therrien; Graniteville, VT’s, Christopher Pelkey; and Milton, VT’s, Dylan Payea are four other Tour regulars to watch. The season hasn’t quite started according to plan for Dubeau, who sits sixth in points. In a statement that would have been unheard of a year ago, Thunder Road could be a place for him to turn things around.

Therrien, meanwhile, is the 2017 “King of the Road” and reigning Vermont Milk Bowl champion. He and teammate Pelkey have been running weekly at Thunder Road this year, familiarizing themselves even more with the track as it changes and develops. Payea raced Flying Tigers at Thunder Road for many seasons before graduating to Late Models and hopes for more luck than he has had in recent trips to Barre. They and many other Tour regulars are expected to battle several top Thunder Road stars for points, purse and bragging rights Sunday afternoon.

Limited spectator attendance is permitted with advance ticket sales at www.happsnow.com/event/Thunder-Road-Speedbowl. Admission is $25 for adults and $5 for kids ages 12 and under. Northeast Sports Network will also offer a $25 live pay-per-view broadcast at www.NSNsports.net/sponsors/racing for those who can’t attend in-person.

For more information, contact the ACT offices at (802) 244-6963, This email address is being protected from spambots. You need JavaScript enabled to view it., or visit www.acttour.com or www.thunderroadvt.com. You can also get updates on Facebook and Twitter at @ACTTour.