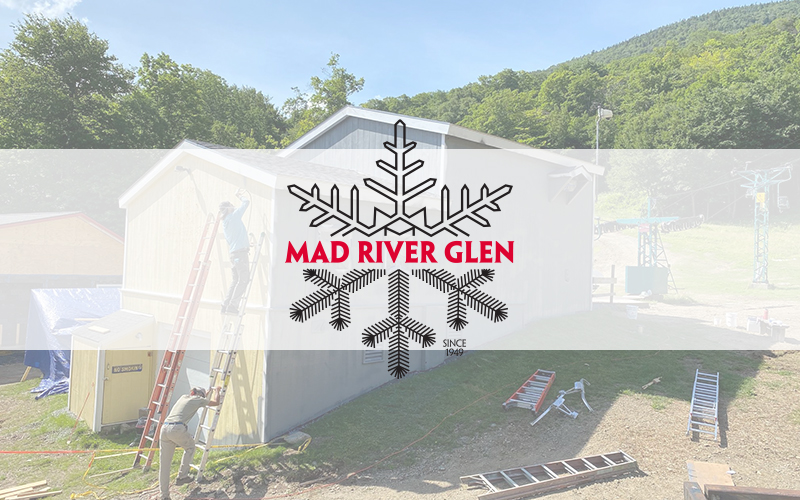 Bright bold colors draw one’s eye to the Basebox and the new three-story addition. Nearby, the new ski school and ski patrol building is ahead of schedule. Mad River Glen’s $3.2 million summer upgrade project was in full swing when general manager Matt Lillard gave this reporter a tour. 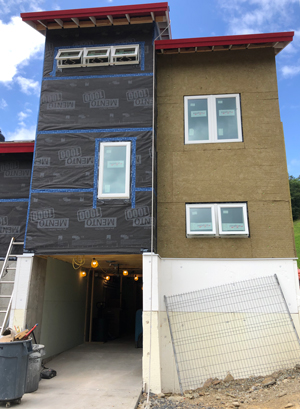 Starting with the Basebox, new ADA compliant doors have been constructed to the right of the existing lower entrance to the Basebox. Just inside those doors are stairs leading to new space on the second and third floors as well as space for an elevator. Mechanicals and cold and frozen food storage spaces follow. Mad River Glen is replacing five chest freezers with a new walk-in freezer and installing a new three-phase power distribution system.  (Side note: There’s quite a shortage of freezers in Vermont and across the country due to people wanting to freeze food – those might be valuable!) There’s a new high-efficiency boiler and multiple safety and code upgrades.

The bathrooms on the first floor are being completely renovated and walls have been pushed back in the lunchroom for 6- and 7-year-old kids. Ascending the steps to the second floor, the most noteworthy thing was the smell of lumber and fresh paint. The smell of french fries and the fish fries is gone (for now!)

There’s enhanced ventilation, more cold storage, new windows, new prep and pass-through areas and a designated spot for Friday night fish fries. Passing from the private to the public areas of General Stark’s Pub, the most obvious thing to see is that all the kitchen gear and supplies are in tall precarious stacks of boxes. Lillard was unphased by this chaotic scene and said it would take a couple of people a couple of hours to put it right.

Passing by a silverware tray led to a question about MRG’s plans for utensils this ski season during COVID. Schools are turning to disposable silverware and paper plates. Lillard said that MRG would be using either recyclable silverware or compostable.

The new ski patrol/ski school building features large windows and tall ceilings with room for ski instructor lockers and a ski tuning area. The ski patrol side mirrors the large windows on the other side, plus includes a locker area and then down a few steps, treatment areas and one private treatment room. Built into the wall on the side of the building is the original wooden hatch from the old building that is opened to allow patroller sleds to be slid into the room.

In addition to bright new open spaces, this project is making a big impact on MRG’s energy footprint. The new construction areas are super insulated. The windows are high efficiency as are the new appliances and other upgrades.

“We are shooting for a 50 percent reduction, 815mmbtu's/year (million British thermal units). This is per our Efficiency Vermont Deep Energy Retrofit program agreement. This is achieved through a mix of electricity and fuel,” he said.

Eighty-five percent of the $3.2 million renovation costs are coming from the MRV Preserve Our Paradise campaign and the MRB Co-op is funding up to $500,000, Lillard said.

The project is on schedule, he said with the ski patrol building a week or two ahead of schedule and the Basebox a couple of days behind schedule.

Naylor and Breen Builders of Brandon is doing the work. MRG worked with Vermont Integrated Architecture in Middlebury on the design. Prior to starting the construction project, there was asbestos that had to be removed from the buildings which was done by professionals.