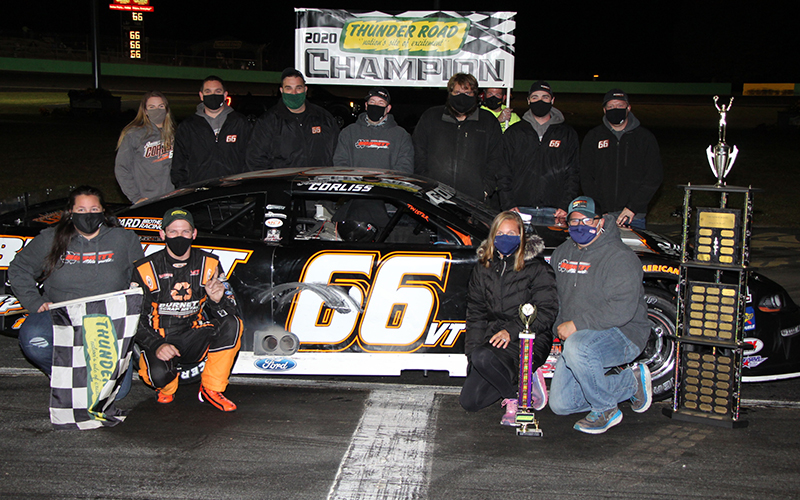 Hometown racer Jason Corliss left absolutely no doubt about who would be the 2020 Thunder Road “King of the Road” by winning the Maplewood/Irving Oil Late Model feature Friday, September 18, on Barre Granite Association Night. Corliss took the lead from Danville’s Tyler Cahoon on lap 42 of the 61-lap anniversary main event and held on the rest of the way to secure his second straight track championship.

The veteran started the main event 13th needing only a 14th-place effort to clinch the championship. Knowing the situation, Corliss stayed calm early, waiting out the mid-pack traffic as Cahoon ran away off the outside pole.

Once the holes opened, though, Corliss went to work filling them. He moved into the fifth position on lap 17, then swung around fellow Barre driver Jim “Boomer” Morris for fourth not long after. It took some time for Corliss to run down Marcel J. Gravel and Brendan Moodie in second and third, but once he did, he quickly dispatched of both to hold second just past the halfway point.

Cahoon still had a big lead, but the margin was erased when the caution flew on lap 35 for Stephen Donahue’s front-stretch spin. On the restart, Corliss got underneath the lapped car of Darrell Morin before setting set his sights on Cahoon.

Corliss finally put his Ford on the high side on the 41st circuit and completed the pass a lap later. Cahoon dogged Corliss the rest of the way with Milton’s Scott dragon entering the picture late as well. But Corliss showed why he’s now the two-time defending track champion by capturing his third point-counting win of the year and fourth overall.

Hinesburg’s Cooper Bouchard used a do-or-die move with 10 laps remaining to win the Myers Container Service Triple Crown Series 100 for the Lenny’s Shoe & Apparel Flying Tigers. Bouchard was up to third on lap 33 when the division was put in time-out after a rash of early cautions, including one a few circuits before when early leader Jaden Perry clobbered the turn-one wall.

After the field returned to the track, Bouchard got under Sam Caron for second and then went back-and-forth with Charlotte’s Rich Lowrey and Waterbury Center’s Jason Woodard. Bouchard wrested the lead away from Lowery for a second time on lap 65 and started to pull away.

With the laps dwindling, though, Kyle Streeter hit the front-stretch wall. As Streeter limped to the pits, Bouchard lifted and Lowrey caught back up. The multi-time Late Model winner then went to Bouchard’s outside and appeared to have him pinned behind a lapped car as they approached the 10-to-go signal.

However, the lapped car drifted up slightly in turn three, and Bouchard filled the hole with a three-wide charge. Lowrey was forced to back off and Bouchard sped away for the victory and the $1,000 top prize.

Northfield’s Cooper French wrapped up the Allen Lumber Street Stock regular season with his second win of the year in a 30-lap feature. French was already challenging polesitter J.T. Blanchard on lap 6 when Tommy Campbell and Kaiden “Tropical Storm” Fisher tangled in turn three to bring out the race’s only caution.

After going door to door for two laps following the restart, French got the break to move out front. The 16-year-old then put the pedal to the metal, dominating the rest of the way to score the victory by more than a straightaway.

East Thetford’s Gray easily secured the Street Stock championship, joining his late father Troy as a father-son Street Stock title duo. Despite the early spin, Fisher rallied late to unofficially hold off Luke Peters by one point for the Rookie of the Year award.

Prescott got the jump on the restart only for Marcheski to glue himself to the leader’s bumper. Coming into turn four for the final time, Marcheski got into the back of Prescott, but Prescott kept his car straight and beat Marcheski to the line by a few feet as they split a lapped car.

Adult admission is $20 on Friday, $10 on Saturday, and $30 on Sunday. Kids ages 12 and under are $5 on Friday/Saturday and $10 on Sunday. Advance tickets are on sale now at https://happsnow.com/event/Thunder-Road-Speedbowl. Please visit www.thunderroadvt.com for the track’s face mask policies plus other health and safety guidelines. All three days will be broadcast on the Northeast Sports Network at www.NSNsports.net/sponsors/racing along with most smart TV platforms.