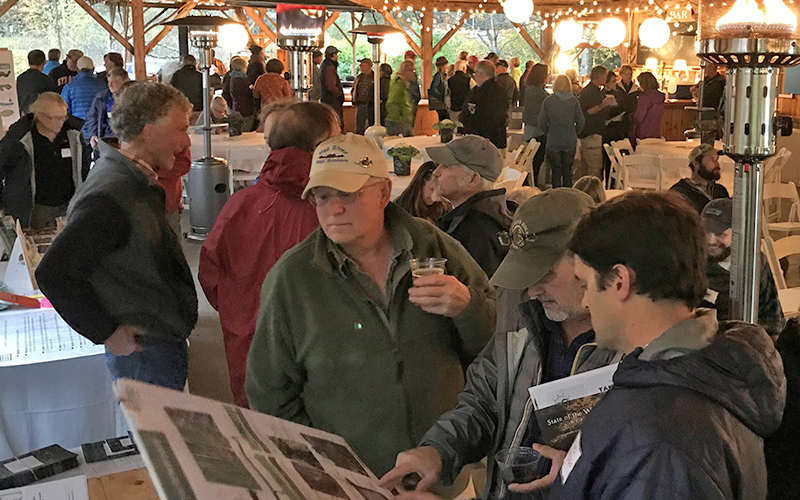 The crisis of Tropical Storm Irene in 2011 exposed the interconnectedness of the Mad River Valley (MRV). Not only laying bare connections between the river and individual livelihoods and community well-being, Irene also showed The Valley’s close social fabric as the community pulled together.

Throughout its 30 years, Friends of the Mad River (FMR) has pulled together with other organizations and individuals to strengthen a cleaner, safer and more resilient Mad River Valley.  That aim and vision for The Valley have been articulated most recently by FMR’s Ridge to River (R2R) initiative, with resilience learning, planning and action driven by volunteers from The Valley’s five towns.

Ridge to River evolved from a group of 20 Valley residents who participated in the 2015 Leahy Center Environmental Summit to brainstorm ways to build flood resilience here. The idea that better runoff management would be a way that the community could reduce flooding challenges catalyzed the group’s work while funding from the High Meadows Fund launched R2R in earnest.

The R2R task force includes representation from select boards and planning commissions of all five watershed towns, Sugarbush Resort, Mad River Valley Planning District and community members, with meetings led by FMR. The task force first hired consultants to gather information about the community’s vulnerabilities, hosted two interactive community forums that highlighted local successes and sought input and ideas, and then worked across the towns to lay out and advance action steps.

“In the past, we started in the river corridor and now our thinking has expanded to include everything … which makes more sense because water starts high and goes low,” said John Hoogenboom, R2R representative from the Moretown Select Board. R2R has launched several programs and shares learning across town boundaries to build resilience.

A 2017 Stone Environmental report commissioned by R2R highlights several specific vulnerabilities. The MRV has relatively high road densities with some 437 miles of roads. Of these, one-third are private and of those 40% have steep slopes. Many steep roads, especially those without regular maintenance, cause fast moving, erosive water to quickly fill streams and rivers.

In prioritizing the importance of maintaining MRV roads so they better slow, spread and sink runoff from increasingly harmful storms, several FMR programs emerged. Storm Smart works with private landowners to help them manage their property and driveways to reduce erosion. Road Roundtables host members from all five town road crews to meet regularly and share challenges, expertise and solutions.

“We’re not competitors, we’re all a part of taking care of this Valley. You (other crews) need something, we’ll help,” Rodney Jones, Waitsfield road foreman, remarked at one Road Roundtable.

To also address fast moving runoff that can result from developed areas, the R2R taskforce worked with FMR and Central Vermont Regional Planning Commission to complete stormwater master plans in 2019 for each of the five towns, prioritizing areas listed for improved infrastructure, especially green stormwater infrastructure. Now, each town is working to advance those plans through engineering design and construction phases.

Another critical finding from the Stone Environmental report was that in the decade between 2001 and 2011, the MRV lost about 450 acres of forest cover. Because healthy forests are an important tool for resilience, watersheds with less than about 65% forest cover suffer significantly more erosion and flooding problems. Seven sub-watersheds in the MRV are below, or at this threshold and likely impacting the river. Working groups of R2R volunteers are now learning more about how they can support community education and healthy forest management for clean swim holes, climate resilience and healthy wildlife populations.

Ridge to River has been learning, acting and taking innovative steps forward for over five years. Not a static group, the task force keeps energizing and creating ways of responding to build resilience within the connected, watershed valley.