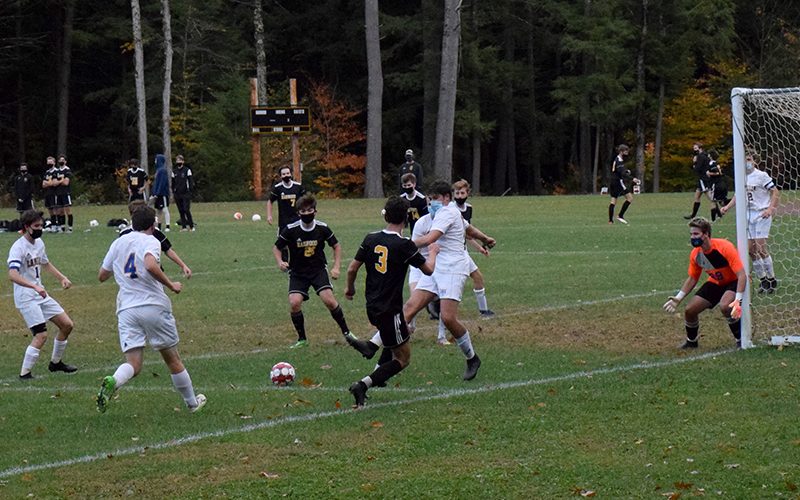 Thompson opened the scoring just 3 minutes 38 seconds into the game. A hard shot into the Lamoille box had players scrambling and bodies flying, and Thompson was able to beat a teammate for the touch to get the ball in the net.

Finn O’Hara scored in the eighth-minute, slotting home a paced pass across the box from Adams. Four minutes later Simmons out jumped everyone to send a cross from Jordan Shullenberger back across the goal and into the net.

Hayden Adams capped Harwood’s scoring in the 18th minute beating a Lancer defender 1-on-1 and driving home a goal from outside the 18-yard box.

Harwood controlled play through the second half but were unable to add to the first half tally.

Harwood defenders successfully snuffed out attempt after attempt by Lancer forwards in the second half and goalie Jake Collier made a diving two-handed goal-saving block in the last 10 minutes to keep Lamoille at bay.

Harwood will be without Collier for the next game after he picked up a red card in the waning minutes Wednesday. Collier, who had made six saves earlier, was booked after sprinting out of the box in an attempt to stop a long pass over the Harwood defense and colliding with a Lancer player. Skyler Platt stepped in and made two more saves in the game to secure a clean sheet for the Highlanders.

Harwood travels to Lyndon Institute on Saturday, October 3, for a 3 p.m. start time.