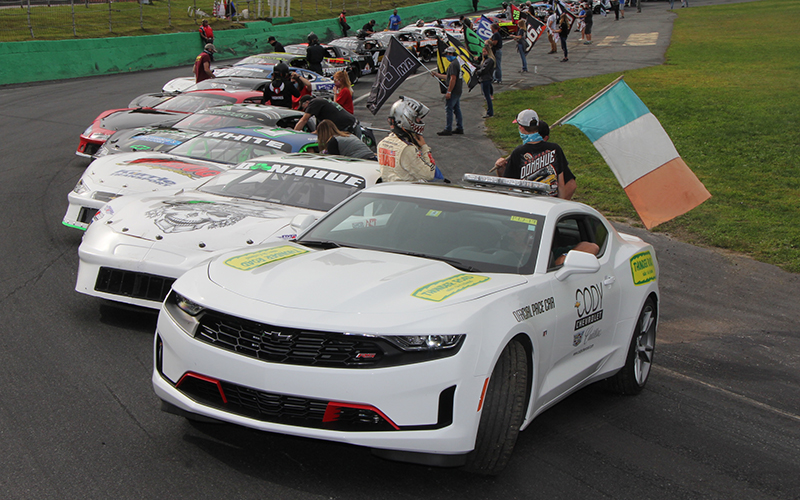 Just like the racing teams at Barre’s Thunder Road, the Northeast Sports Network (NSN) is pulling out all the stops for the 58th Vermont Milk Bowl presented by Northfield Savings Bank this Sunday, October 4. NSN has unveiled plans for a five-camera broadcast of Sunday’s event with Multi-Angle Instant Replay sponsored by Wes Ward Auto Repair of St. Johnsbury.

For the Milk Bowl, NSN is expanding beyond their normal two-camera broadcast that has proved popular among fans. Milk Bowl Sunday’s high-end production style will show fans even more of the action in a way they have never seen before. The five cameras will be positioned all around the track for complete coverage of every thrilling pass, incidental fender rub or heart-stopping accident.

Each camera angle will be able to provide instant replays whether or not that angle provided the live picture.  If there is a crash or important pass and the live camera misses it, one of the other four cameras will almost certainly capture it, letting fans see exactly what happened.

"We are excited to unveil this enhanced level of broadcast to the Thunder Road fans,” NSN operations manager Kevin Trask said. “The multi-angle replay has been well received whenever we use it. Thank you to Wes Ward Auto Repair for sponsoring this feature. We have enjoyed working with everyone at Thunder Road this year, and we hope the fans enjoy this expanded coverage to end the season!"

Those who tune in to NSN’s broadcast get to watch some of the biggest names in ACT-type Late Model racing fight for the right to kiss the cow. Newly crowned Thunder Road “King of the Road” Jason Corliss, defending Milk Bowl winner Bobby Therrien, Midsummer Classic 250 winner Dillon Moltz, American-Canadian Tour (ACT) standout Ryan Kuhn, and two-time Thunder Road champion Scott Dragon are just a handful of the top racers who have entered the 58th Milk Bowl.

The Northeast Sports Network will have a live pay-per-view broadcast of the entire weekend. The broadcast is $50 for all three days, $40 for Saturday/Sunday, or $25 for Friday-only. Fans can sign up at www.NSNsports.net/sponsors/racing.