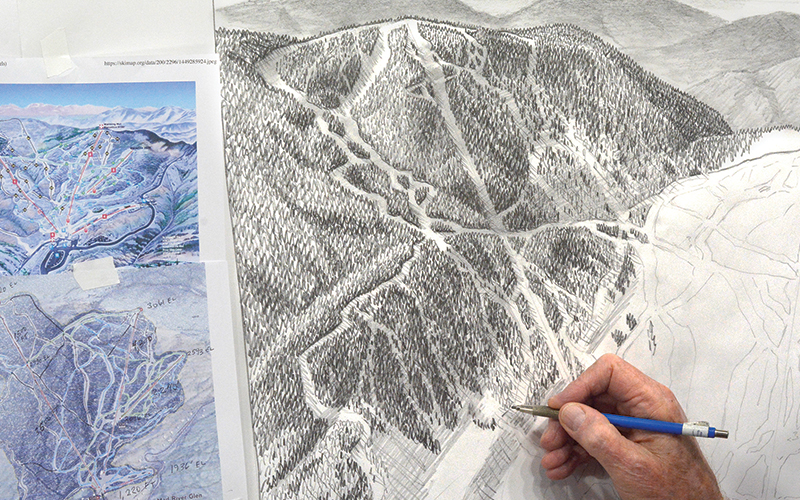 Open Road Ski Company marked the end of its successful campaign in partnership with James Niehues and Mad River Glen over the weekend, releasing a first look at the hand-painted trail map and raising a total of $121,327, surpassing the initial goal by over 1,500%.

Open Road Ski Company, the company that created “The Man Behind the Maps,” led a Kickstarter campaign for a new Mad River Glen trail map hand painted by James Niehues. The campaign ran for one month with an initial goal of $7,500, which was surpassed within the first hours after launch. The campaign finished on Mad River Glen’s Green and Gold weekend, the traditional kickoff to the ski season. All profits will benefit the Stark Mountain Foundation.

“This partnership took off immediately and absolutely blew us away with its success,” said Mad River Glen’s marketing and events director Ry Young. “Not only do we now have a stunning hand-painted trail map from the best in the business, but we’ve also raised a sizeable nest egg we can use to help with all-new, on-mountain signage and other mountain projects utilizing the artwork.”

The artist behind Mad River Glen’s new map, Niehues, has created a career as the premier trail map painter. He photographs the mountain from all angles, and then interprets the different perspectives into a single flat painting -- something not easily replicated by computers. Through his process he paints everything down to the individual trees and rocks with unmatched accuracy.

“Mad River Glen has been an absolutely fascinating project,” said Niehues. “There are so many intricacies to the mountain. An important rock here, and a lightly cut glade there -- the mountain is dotted with features that make it unique and prove why it’s such a deeply loved mountain.”

Now that the Kickstarter campaign has been completed, all 514 backers will receive prints in the coming weeks, with maps available online later in the year. The money raised will go to Mad River Glen and the Stark Mountain Foundation to help with on-mountain projects related to the artwork for years to come.

“Ben and I are thrilled with the results. We are proud to have raised so much money for Mad River Glen and the Stark Mountain Foundation,” says Todd Bennett, co-founder of Open Road Ski Company.