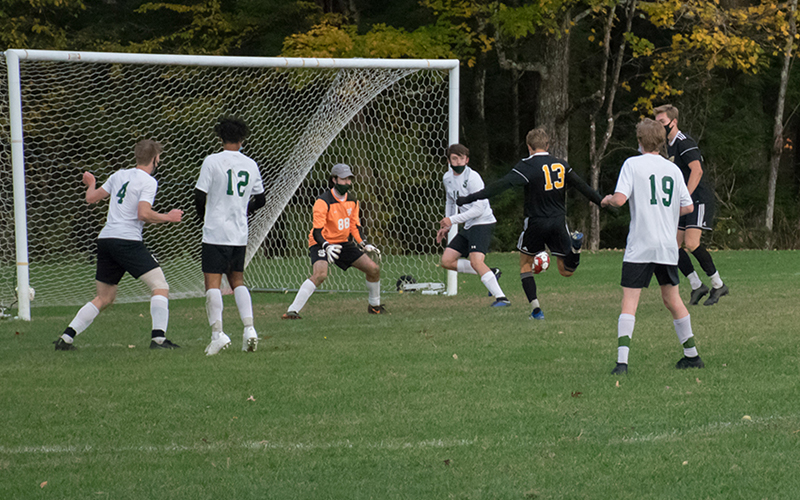 In varsity boys’ soccer, Division 2 Harwood hosted Division 1 St. Johnsbury Academy on Thursday, October 8. Harwood went toe-to-toe with their larger opponent and held them to a 1-1 draw through regular time, only to concede a golden goal in the first overtime period for the team’s first loss of the season. Harwood’s goal came from Jordan Schullenberger.

From the first whistle Harwood let it be known that the Hilltoppers would have to take them seriously.

“I thought we really came out to play,” said Harwood coach Joe Yalicki. “That game was back and forth for the entire match and we had control for a few stretches. It was a great challenge for us to have to defend a lot and be mindful of our chances.”

St. Johnsbury was the first big test that Harwood’s defense has faced this year and they rose to the challenge allowing eight shots total with only three of those on net. “I thought we kept St. J out of our box really well and defended in the middle of the field effectively,” said Yalicki.

At the half it was a scoreless draw with both teams having opportunities that they failed to capitalize upon. “We just couldn't get that final pass for a quality chance on goal. The second half was going to come down to work rate and effort,” Yalicki reported.

The Hilltoppers struck first in the 58th minute on a strong counter attack capped off by a beautifully struck ball from Gardner Auchincloss that squeezed between the outstretched hands of Harwood keeper Jake Collier and the side of the goal.

Harwood didn’t let down, digging in and creating opportunities in the St. Johnsbury half of the field. At the 68-minute mark their efforts paid off as Jordan Schullenberger drove home the equalizer from the 6-yard box on a pass from Jack Birmingham.

Regular time ended 1-1 and a draw would have been a great end to how both teams played.

In golden-goal overtime Harwood took their chance first with a quick foray into the St. J box but couldn’t get that last pass to click. Then on their counter attack St. Johnsbury forced a corner kick that rattled around Harwood’s box and where Auchincloss was able to get his second goal of the day for the overtime win.

“Losing via a golden goal never feels good. It happens so fast,” said Yalicki. “We were disappointed, but not deflated after the match.”

Halfway through their shortened COVID season Harwood coach Yalicki said he has been using the early games, almost like a preseason, to figure out where to position players to get the best from them. Seeing progress from his team through the first half of the season and a strong performance Thursday, despite the loss, Yalicki hopes to build on his team’s growth.

“All I'm thinking about is can we respond to today and play well at practice and then in our next match, Saturday?” said Yalicki adding, “I am hoping for equal or greater effort as Thursday, better execution and a heightened sense of awareness from all players.”

Harwood will have to regroup quickly as they head to Morrisville to take on People’s Academy on Saturday, October 10. That game is scheduled to begin at 4 p.m.