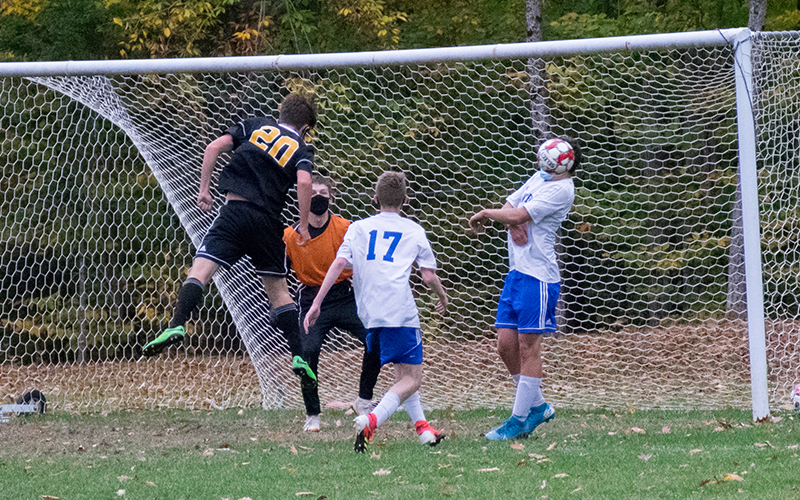 The Harwood boys’ defense put in another strong performance Tuesday, October 6, to anchor the Highlanders 4-0 home win over Thetford Academy. Goals from Hayden Adams, Jorden Schullenberger and Finn O’Hara sent the Highlanders to a 3 and 0 record going into Thursday’s match against St. Johnsbury.

After 30 minutes of attempt after attempt, Harwood finally got on the board with a break-through goal from Hayden Adams at the 37-minute mark.

“It took a long time to get that first goal,” said Harwood coach Joe Yalicki, “He's a great player and he's our leader so when he's able to do that it can make a lot of other missed opportunities seem irrelevant. There was a good energy after his goal and I would have bet at least one dollar we could get one more goal in the next five minutes.” Harwood had a few more shots but the half ended with Thetford holding the Highlanders to a 1-0 lead.

Yalicki’s half-time message to his kids was simple, “Play harder and have more fun. Take chances and be there for each other. We have so many good players that I want to trust their instincts on the field and just play.”

The second half saw an initial burst of offense from Thetford as they attempted to get through the Harwood defensive lines. Goalie Jake Collier was called on to clean up a few long passes but was not put under any real pressure. Collier recorded his second and the team’s third straight shutout.

Harwood kept up their attacking play and grew in confidence with better ball control and crisper passes as the half progressed.

Harwood’s second half goals came in a flurry opening with their second goal in the 68th minute after a shot from Harwood midfielder Jack Birmingham rebounded in the box which Jorden Schullenberger sent into the back of the net.

O’Hara added Harwood’s fourth goal at the 72-minute mark with a distance shot to the far post from way outside the box that beat a diving Thetford goalie.

Harwood hosts St. Johnsbury on Thursday at home and then travels to People’s Academy on Saturday to finish off a run of five games in 10 days.

“This is like the tournament portion of our schedule. Games and not much practice time. Though I wouldn't want a whole season of that, this is a good test for us. A good team should show up Thursday knowing what's at stake and play well. No practice between games shouldn't make you rusty, it should make you hungry,” said Yalicki.

Looking ahead to Thursday’s opponent Yalicki had this to say, “I am just excited to play St. J. We often scrimmage them because they represent a good D1 Metro league challenge. They have a ton of final 4's over the last few years so if we can hang with them, we can hang with anyone.”