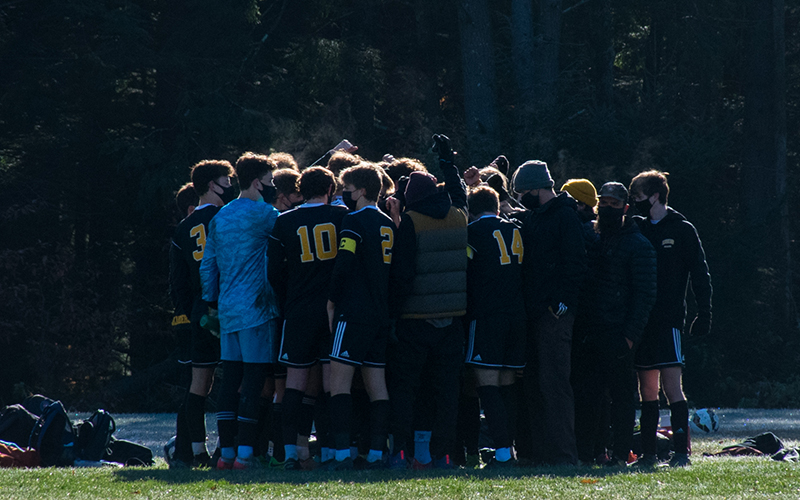 The Harwood boys’ soccer season came to an end Saturday after a clash of equals came down to the soccer equivalent of a coin toss for the Division 2 quarter-final. Harwood and Montpelier battled to a regular time 1-1 draw, followed by two scoreless ten-minute golden-goal overtime periods, capped off with not one but two best-of-five penalty kick shootouts that Montpelier won 4-3.

Montpelier struck first on a corner kick goal in the 19th minute of the first half. Reminiscent of their regular season match up a ball into the goalie, this time Harwood goalie Jake Collier, took an awkward bounce as he went to kick it away forcing a scrambling save giving Montpelier a corner kick. Taking the kick Montpelier’s Quinn Mills curled in a stunning, training pitch style, goal to give the Solans the lead they held onto into going into the half.

At the half Harwood switched up their formation to create more attacking options. “For the most part it worked. We got the one goal we needed, but couldn't get the second,” said Harwood coach Joe Yalicki.

Harwood battled back to equalize just 7minutes into the second half with a cracking goal from senior Gavin Thomsen. Thomsen received the ball from Jack Birmingham at the top of the 18-yard box which he drove past a diving Montpelier goalie Max Weinstein.

From there it was a back and forth battle highlighted by two defenses that held strong as both teams fought for an elusive game winner.

Both teams had missed chances; Harwood missing a prime opportunity for the opening goal with a close range shot that went over the top and then a game ender in the second overtime that went just wide. Montpelier had a first half break away and a golden goal penalty from just outside the 18, both stopped adeptly by Collier. Montpelier also escaped the first overtime period after being called for a penalty just outside their 18 year box with 12 seconds on the clock. Harwood scrambled to get the ball down and get the shot off as time ran out and the horn sounded.

“Unfortunately, the clock does not stop in Vermont high school games for that reason. I was hoping we might try to take a rushed shot, but unfortunately that didn't happen in time,” said Yalicki.

The team soccer ended in a 1-1 draw, but being a playoff, a winner was needed and they went into a best-of-five penalty shootout.

In the first best-of, Harwood goalie Collier guessed right and stopped the first Montpelier shot. Then half-way though Montpelier goalie Weinstein guessed right equalizing things. After both teams finished off with goals they went into a second round of best-of-five where Weinstein guessed correctly one more time than Collier sending Montpelier into the semi-final round Tuesday against Cinderella story, #14 seeded, Lake Region who have knocked off #2 seed Stowe and #7 seed U-32.

“It's tough to lose on PKs, but we certainly had a lot of time and chances in regulation and overtime to win the game outright,” said Yalicki.

As the year ends Yalicki had these final words, “I'm just proud. I spent a lot of time since September 8 thinking about the team, the players, strategies, drills, and messages to send. All in all, I'm glad we made it to the end, unscathed, with everyone healthy, and as a strong team. We gave the community something to rally behind during tough times. We focused on positives, and we never quit in any game. We were down 1-0 three-times this year and battled back to even the game every time. Every time we scored first, we held on to win the game. Soccer is a game of precision and capitalizing on minute chances. Today wasn't our day, but I still end the season really proud of all we accomplished. It's a great team that I am sad to say goodbye to.”