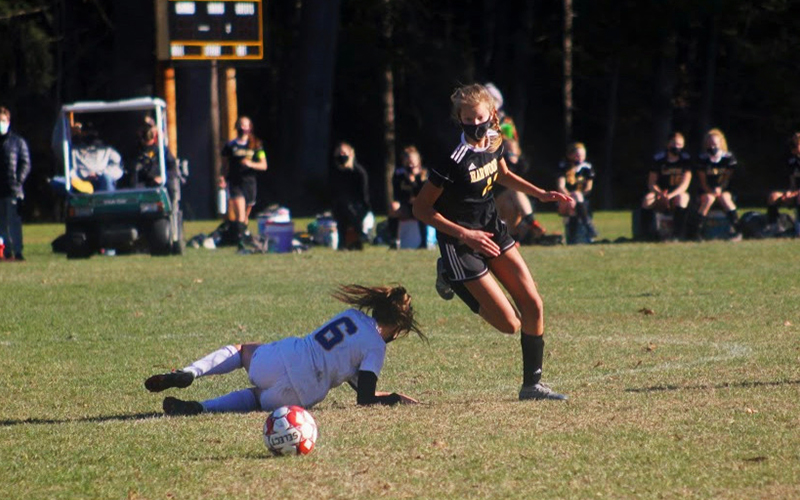 The Harwood girls’ soccer team beat Lamoille 10-2 at home on Saturday, October 31, during the quarter-finals of play-offs securing a place in the semi-final round on Wednesday, November 4.

The minute the ball was struck, Harwood dominated the field and went into the game as if it was the last. Everyone put all they had on the field, like always, and proceeded to make quick passes and shoot with creative angles.

A 5-0 halftime score didn't stop the girls from playing hard or keeping the intensity up in the second half. They also weren't fazed when Kaylee White (# 5) on the Lamoille team scored on a penalty kick within the first 10 minutes of the second half.

White’s goal only served to fire up the Harwood side. Nelson brought the energy back up and scored with 27 minutes to go off an assist from Ravelin. Nelson scored again within the next 10 minutes.

Ashley Proteau scored a beautiful back of the net goal just above the goalie's fingertips with 19 minutes remaining, followed 4minutes later with a goal from freshman Tessa Jernigan.

Ravelin scored the final goal that got Harwood double digits for their first playoff with another assist from Siena Mazer with 5 minutes to go.

Both of the Harwood Goalies, Sarah Bartolomei, and Poppy Woods played amazing halves and made some phenomenal saves when the Lamoille team made it to the goal.

The team had a beautiful start to playoffs and as Katie Rush, one of the captains would say, "Let's get this ladies, keep it up!".