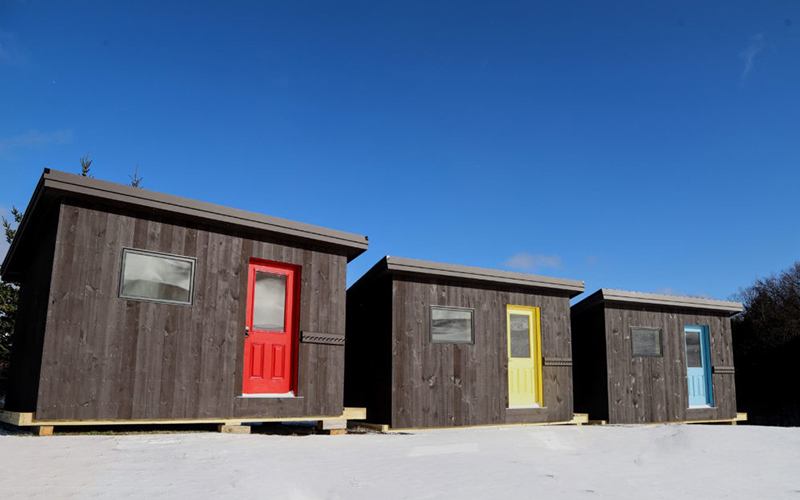 It started out as an idea about creating tented areas for people to gather and get warm while skiing at Sugarbush this year with COVID restrictions reducing capacity in base lodges.

Sugarbush CEO John Hammond and his team were kicking around ideas when CAO Kevin Babic suggested building small, rentable base lodges. Hammond’s other team members came up with prototypes and six were built; four for Sugarbush’s Lincoln Peak and two for Mount Ellen.

The brightly-colored cabins are about 8-by-10 and feature a custom picnic table plus two chairs, a tiny Rinnai propane wall heater, a window with glass and a door with glass that is locked and unlocked via a key code. They have wooden floors. They are designed for eight people. The cabins come equipped with boot and bag storage as well as a cooler.

Each cabin is going to be named for one of the peaks on the ridgeline including Lincoln Peak, Nancy Hanks Peak Castlerock Peak, Cutts Peak, Mount Ellen and Stark Mountain. Accompanying each cabin will be information about that peak and Vermont’s Long Trail.

There will be no electricity in the cabins, but those who rent them will be loaned portable USB chargers to charge their phones and other electronic devices. People can either bring their own food and store it in a cooler in the cabin, or they can call for food to be delivered from Rumbles’ Kitchen.

At both mountains, the cabins are located slopeside and are ski-on and ski-off. People will reserve them through the resort’s online reservation system. Pricing is $400 midweek and $550 on weekends and holidays. Guests will have access to them from 8 a.m. to 4:15 p.m.

Resort spokesperson John Bleh said depending on how the cabins work this winter, more might be constructed for next year or maybe they could be used in the future.

Besides the cabins, Sugarbush will have fire pits and heat lamps around the base areas for warming up and will have grab-and-go meals as well as seating by reservation at limited capacity in the base lodges. People are encouraged to boot up in their cars as there will be not boot/bag storage this year.

Despite extensive early season snowmaking efforts, due to lack of cooperation from Mother Nature this year, Sugarbush has pushed back its opening day to December 10 in order to open with enough terrain to keep people spread out and avoid downloading on chairlifts.