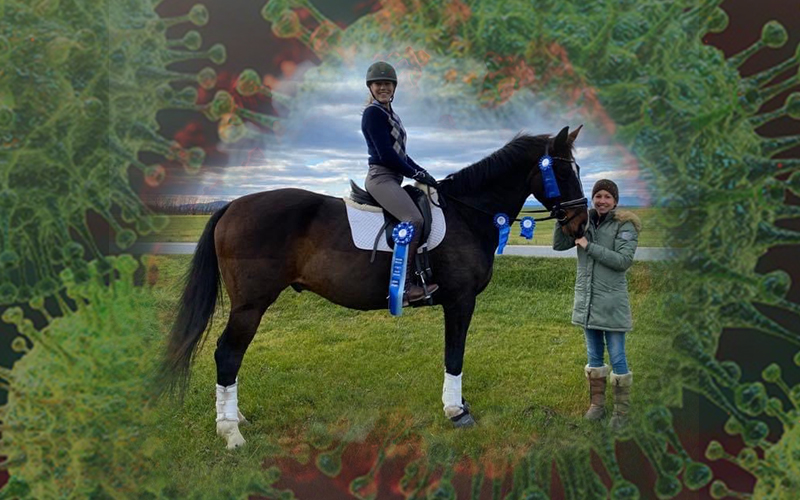 COVID-19 changed the horse world significantly. During the March shutdown, horse owners who boarded horses at large stables were kept from their horses until the guidelines were revised several weeks later.

Riding programs scrambled to continue feeding and caring for their horses, a difficult challenge with no income.

Waitsfield equestrian, dressage and competition instructor and judge Meg Hilly said that equestrians are used to infectious disease protocols with horses being susceptible to things like strangles or H1N1, so adding the COVID-19 protocols is not completely foreign to equestrians.

This spring, local stables created COVID-19 releases and posted signs similar to what are found at doctors’ or dentists’ office, and limited the number of people allowed in the barn and tackroom.

“And many horse sports are done individually, so for most of us life goes on as usual, mucking stalls and such. Horse people recognize their horse time as therapy; horses are good for the soul, so we horse people feel blessed to have them in our lives, and not showing is not the end of the world.” Hilly said.

But she noted that it takes great effort to organize a show and many shows that happen year after year may be in jeopardy in the future, affecting many trainers’ livelihoods.

“Most horse-related competitions were canceled across the country at first, but then some shows were held limiting the number of participants and the riders were allowed a coach and a trainer, no spectators, and with a “show and go” policy. I usually judge two to three shows a month and most of my dates were canceled, until midsummer, when I was offered some dates for limited capacity shows. Some clinics were held, including a clinic at Chestnut Hill Farm in Shelburne, with Olympic rider from Fayston, Laura Graves, which had a limit on auditors and participants,” Hilly said.

Some show organizers elected to go virtual including the Greystone show series which hosted a series of virtual dressage shows online.

“I messaged the organizer, Kim Carpenter, and asked if they accepted entries from Vermont. Kim was happy to have us. After a few months, she started to get entries from all over the country. Then she decided to hold a virtual trail show, where riders sent in videos of themselves crossing a brook, jumping a log, whatever the challenge was, and entries started coming in from as far away as Australia,” Hilly added.

Virtual offered riders a way to ride through the pandemic without having to travel with the horses to away shows. Hilly said Carpenter is adding more virtual shows to her 2021 calendar and other organizers are following suit.

How it works: A video is made of horse and rider doing their dressage test in a small or large dressage court, and then uploaded to Youtube. From there it is posted to the Virtual Facebook page. The judge takes a week to watch and judge all of the rides, and then the scores are tabulated and posted online on the show page, and ribbons are sent in the mail.

Donnerlucke was stabled at North Fork in Charlotte, ridden by pro rider Lilly Joseph in the September show and in October with past Mount Holyoke College dressage team member and IDA National Reserve Champion Ellie Demmons helping each other with their video entries.

Here are the results from the horses and riders: