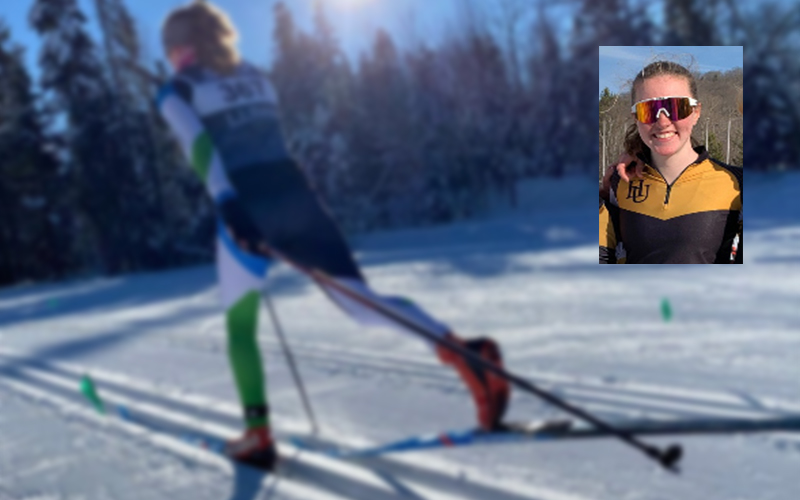 On Sunday, January 24, Thurston won first place in the 10-kilometer classic, with a winning time of 34 minutes, 55.3 seconds, coming in 1 minute and 24 seconds faster than runner-up Quincy Massey-Bierman.

“The conditions were awesome,” Thurston told The Valley Reporter during an interview. “But the course was super hard. It was very hilly. There were two big steep uphills.”

The tough course, plus the short 20-minute break between races on Saturday proved to be a challenge. “My body felt tired for the first one and it was hard to keep the momentum going for the second one,” said Thurston. “Saturday, I didn’t feel as good. So, I wasn’t sure about the next day.”

However, on Sunday, Thurston came to the race with a new mindset. “Sunday was a super nice day. It was super pretty. The snow was clinging to all the trees. I came to the race with the mindset of, ‘I’m not skiing for the results.’ I had a plan to just go out there and ski it for myself and have fun,” she said.

Thurston felt good about her 10-kilometer Sunday race, even before finding out she’d won the whole thing. “When I finish races, I don’t go to the results right away. I reflect and think about the race,” said Thurston. “I felt really good about pushing hard the whole race. I was really happy feeling that I had given it my all.”

Thurston is a longtime cross-country skier,having been a part of the Mansfield Nordic Ski Club since fourth grade. “It’s cool to have all these people of different ages and see new kids coming into the club. We’ve got a great junior girl gang,” she said.

In addition to skiing for the club, Thurston skis for Harwood’s varsity Nordic ski team, which has been practicing four times a week amidst the pandemic. Since Nordic skiing is an outdoor sport, high school teams are allowed to compete against one another, with only two schools allowed at each venue at a time.

The Harwood varsity Nordic ski team has its first race on Saturday, but Thurston won’t be able to make it as this Saturday she sets off for Vuokatti, Finland, to participate in the upcoming Nordic skiing junior world championships.

Thurston was one of a handful of Vermont high school students selected to attend the world championships. To pick world championship qualifiers, NENSA picks its top skiers, then a committee analyzes their results from last year, along with a few early season trials from this year. They also look for skiers with previous international racing experience, which bodes will for Thurston, who competed in Sweden last year.

On Saturday, Thurston will begin her solo trip to Finland and will be fully COVID-19 vetted every step of the way. “We had a COVID mitigation meeting with the U.S. Ski Team,” she said. “They have lots of steps in place. I need a test 72 hours before the race, and four hours before. I have all these documents that say I can travel. They take a lot of precautions. Luckily the U.S. Ski Team, the cross-country team, has had no cases of COVID, so their precautions seem to be working pretty well.”

In Finland, Thurston will be competing against people 20 years old and under. She feels well prepared, as this year she has been training more than most.

“This year is unique in that I’ve done a lot more training. I’ve upped my hours,” she said. “On the days that I have asynchronous learning, Monday and Tuesday, I can go train in the morning, come back and get some school work done, then train again in the afternoon. In a normal year it’s a lot harder.”

For Thurston, training involves doing short interval ski sets, long-distance skiing and strength training in the gym. When she has more time off, she raises her training hours more.

“I have volume weeks, which are weeks where I train a lot more hours. Like during Thanksgiving I would do a distance ski in the morning and something shorter in the afternoon.”

Despite her intense training schedule, Thurston always finds time to prioritize her school work. “All my teachers have been great. I’ve been able to work really well with them to work around any trips and athletic things that I’ve had going on,” she said. “I try to put school work first. I’m definitely a student before an athlete.”