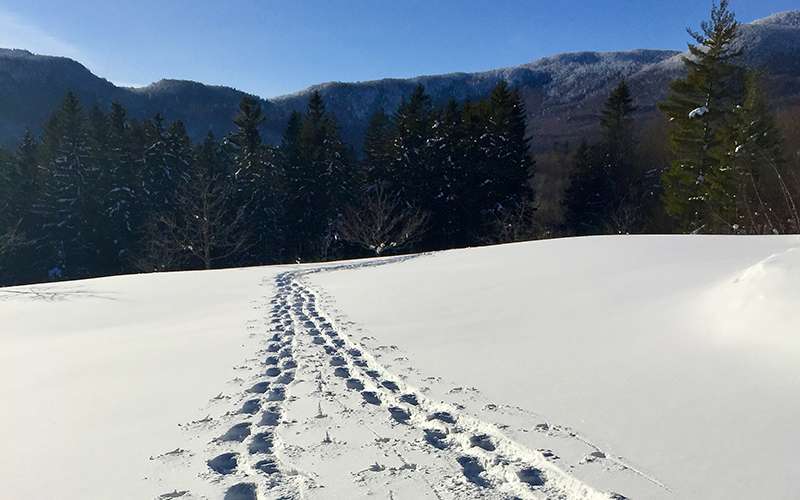 Backcountry skiing is a staple activity for many Vermonters, but this year it seems to have grown in popularity. Many outdoor equipment stores have been selling more gear than ever.

Clearwater Sports in Waitsfield has been in business for 46 years. This year, they’ve been selling more snowshoes, cross-country and backcountry skis. “Those have been flying . . . periodically,” said owner Barry Bender. He also said that touring gear has been very popular.

According to Bender, this year Clearwater Sports has been moving much more inventory and most of it is for backcountry or cross-country skiing. Bender also said that the supply chain is “broken, to say the least.” In fact, Fischer, an outdoor equipment company, had a fire at one of their largest factories located in Ukraine during October. Bender was surprised to get a shipment recently from Fischer. “It sold in a day,” he said, referring to the entire shipment.

Steven Brownlee, a Valley resident, is a manager at Umiak Outdoor Outfitters and said that their location in Stowe has been “depleted” in certain categories. The store has not run out of any particular item, but pickings have become slim. Different sizes have become sparse. Brownlee said that they have been selling 10 times the amount of backcountry and Nordic gear they did last year. Brownlee compared this increase to the increase in canoes, kayaks and stand-up paddle boards Umiak saw during the summer.

“Most of our Nordic and backcountry customers were alpine skiers. These are local skiers who did not want to go and stand in the lift line with out-of-towners and expose themselves to the COVID world,” said Brownlee. AT equipment, both telemark and alpine, has also been very popular. “The Mad River Valley is full of tele skiers,” he said. All they have to do is buy skins and they are all set for skinning in the backcountry.

“We’ve also seen an explosion in our rentals and our tours,” he said. There were a lot of people from out of state taking tours in the past, but this year there have been fewer. Brownlee also said that because they’ve expanded their tours into the Mad River Valley, more people from The Valley have been taking tours and trying to learn more about the activity. There are many people who don’t know where to go, how to use the equipment or how to be safe. “There is no ski patrol out there!” he said with a laugh.

“This year has been a great year to get out and there have been plenty of beautiful nights to do so,” said Vincent Spina, a senior at Harwood who loves to backcountry ski. “One of the things that I have noticed is the way more uphill traffic, especially at night. There were times over Christmas break where I would start going up and turn around because of how many people are there,” said Spina.

“It’s kind of something that I like to do myself or with my friends when I can, and sometimes it’s just not the same when there are lots of other people. I do strongly encourage people to go up and take advantage of the snow that is here and to get that hike or workout in whenever they can because they will not regret it.”

Spina, a Mad River Valley Ambulance Service member, cautioned, “It is not for everyone and there can be serious risks with inexperienced skiers going up expert terrain that they will have trouble going down.”