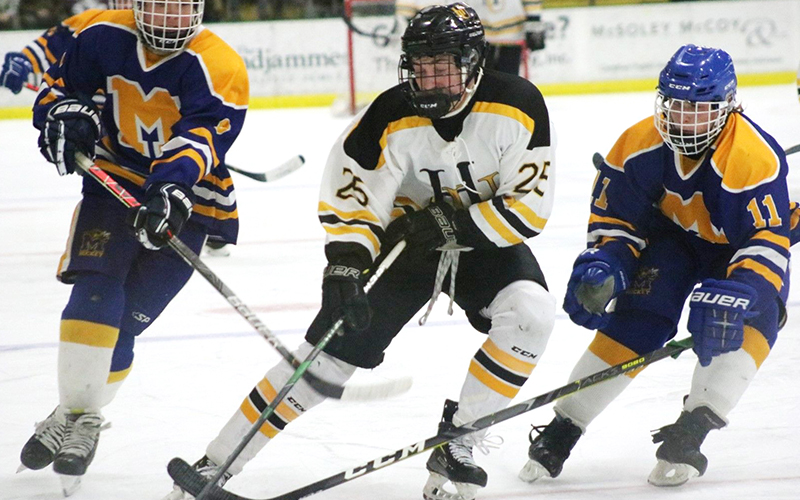 “This game was a big test for us,” said coach Shawn Thompson. “It was a physical game between two talented teams, the boys stayed disciplined and focused on putting the puck in the net. Our passing was much improved from the previous game.”

“I felt like we let our foot off the gas pedal a bit in the third period when we were ahead 5-2,” Thompson continued. “We need to keep up the high level of play and continue our momentum into the next game.”

The boys were supposed to play St Johnsbury on March 3; however, St Johnsbury is now in quarantine. “We are waiting to hear back from a couple other teams to see if we can have an opponent. Our last two games are also against teams that are currently in quarantine, so those are up in the air. We are in contact with many other schools to make sure we have teams to play to finish out the regular season,” said Thompson.

As for watching O’Hara score his 100th point, Thompson said, “It’s amazing to see him hitting 100 points four games into his junior year. We all know Finn can score goals, but he’s also a playmaker at heart.”

Harwood’s Louisa Thomsen scored the first of her three goals early the first period. Harwood’s Rachel Fernandez scored in the second period, with an assist from Clara Griffin, to earn a 2-0 lead against the Tigers.

In the goal for Harwood, Jordan Hunter had 26 saves. Middlebury goalie Lydia Deppman finished with 21 saves.

The girls will host South Burlington at 5:30 p.m. on Wednesday.

On Tuesday, March 2, the Harwood varsity girls’ basketball team suffered its second consecutive loss of the season. The girls lost 45-39 against Middlebury on their home court. “It was a well-fought game,” said coach Tom Young. “We were up seven points at half time. But our defense let up a good amount of points second half.”

Young pointed out that with over half the team being new players this year, some of the girls are still learning to fit into their new roles. “Some are coming from JV to varsity. Some are going from the bench to starting. They are all adjusting to new expectations,” said Young.

Big scorers for Harwood during the game included Ashley Proteau with 13 points and Emma Ravelin with nine points.

The team’s next game will be at Northfield on Saturday at 1 p.m.

On Monday, March 1, the Harwood boys’ varsity basketball team played and lost to Vergennes 59-45. “It was a tough loss,” said coach Jay Bellows. “The game was close until the last three minutes.”

Big scorers for Harwood included Isaiah Washington, who led the way with nine points, followed by Cooper Olney and Chris James who had seven apiece, followed by Sawyer Simmons with six points, and Tobey Bellows and Jasper Koliba with five each.

“They kept the game close and had several opportunities to go ahead, but just couldn’t convert on open shots,” said Bellows.