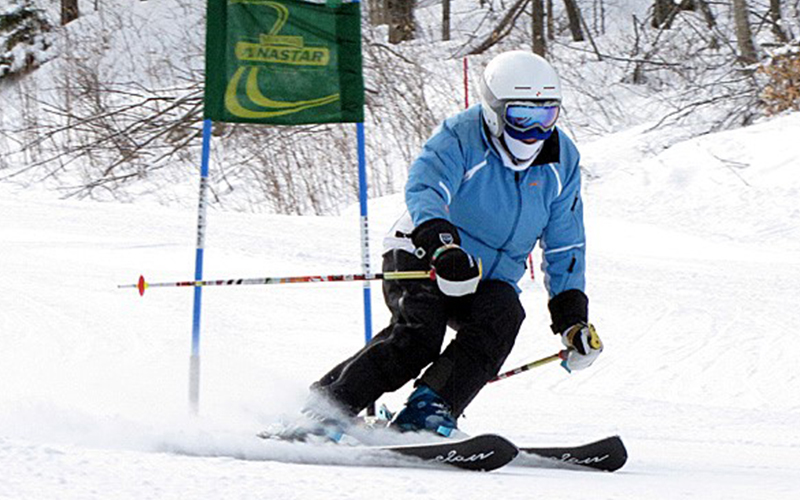 The third Sugarbush Racing Club race was held on February 19 in mild temperatures. Will Nye set a straight course with a fast pace. However, racers suspect that when he set the pace his backpack must have been filled with bricks to provide more downhill momentum.

Competitive spirits were in full flower, although everyone professes that they “just want to improve their time.” Peter Menkes was caught using a spray wax hidden in his pocket to gain more speed. There is some question about how effective it was. Dan Towle took out a gate and lost a ski, which slowed him down, but undaunted, he finished. Jula Fender showed a great improvement in his time. He admitted to some body awareness training from a certain racing instructor which improved his edging. He was right on the heels of Dave Ellison who still eked him out. Yet Dave Seymour and his precision skiing still takes the lead in this threesome. The competition for the champagne prize is heating up with Stephan Ham-Ellis leading the pack.

Among the “fast and furious men” there is a contest between Michael Dixon, Chris Lowenstein and Luke Brighton. Lowenstein is taking the lead with Brighton and Dixon threatening to overtake him in the weeks ahead. Club members said that Riley Winch was needed to join this mix and make it a foursome. Rich Jones had two impressive runs. His observation is that at a certain point age takes a toll on speed; something many club members can identify with. There are a number of racers who came in around 37 to 39 seconds. They are working hard to improve and providing great camaraderie. Maybe they should call themselves the "38s, plus or minus.”

The club did not have a takeout meal and Zoom get together this week because the restaurants were busy with vacation week. Next week, racers start again with a takeout meal from the Hyde Away. Check out their menu at https://hydeawayinn.com and place orders after 4 p.m. on Thursday, February 25. "Supporting local restaurants during this difficult time is important and a good way of saying “thank you” for all the events they have put on for the club over the years. The club has quite a lineup of meals this year and will go till the end of March. The use of a digital readout of our times is a great addition this year. Thanks, Sugarbush," said club member Ray Bollerud.