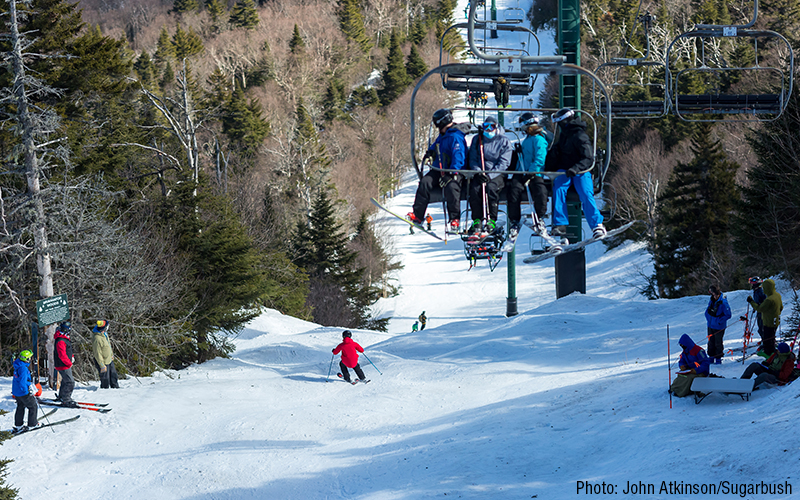 Sugarbush and Mad River Glen collaborated on an International Free Skiers Association event which resurrected a form of the Castlerock Extreme, a legacy event at Sugarbush, and also managed to make the event an IFSA-sanctioned event, allowing participants to earn points for future competitions.

Amber Broadaway, Sugarbush vice-president of guest services and safety, said that the Castlerock Extreme used to be a two-event competition with adults on one day and kids on another. It also used to be an IFSA-sanctioned event, but that had elapsed.

She said that last year Sugarbush freestyle skier David Babic and ski school director Terry Barbour recommended that the resort realign itself with the IFSA circuit. Barbour and Babic reached out to Ry Young, marketing and events manager at Mad River Glen, as well as an IFSA technical director who was able to come on as technical director for last week’s event at Sugarbush.

The competition attracted 82 registrants and it was moved from the Castlerock lift at Lincoln Peak to the Bravo trail off the North Ridge Express at Mount Ellen. That served several purposes: It moved a race away from a busier area to a less popular area with a slower lift serving advance terrain to a high-speed quad which helps the resort meet COVID-19 guidelines on people gathering; it shortened the length of the event to use a faster chair and it provided more opportunities for those on the chair to watch and cheer on the athletes.

“All the feedback from coaches, parents and racers was that it was really positive. Having said that, there were people upset that no Castlerock Extreme with registration for adults was held. We’re going to think about that for next year. This is a signature event for The Valley, and we’re looking at how to balance legacy events with other events,” Broadaway said.