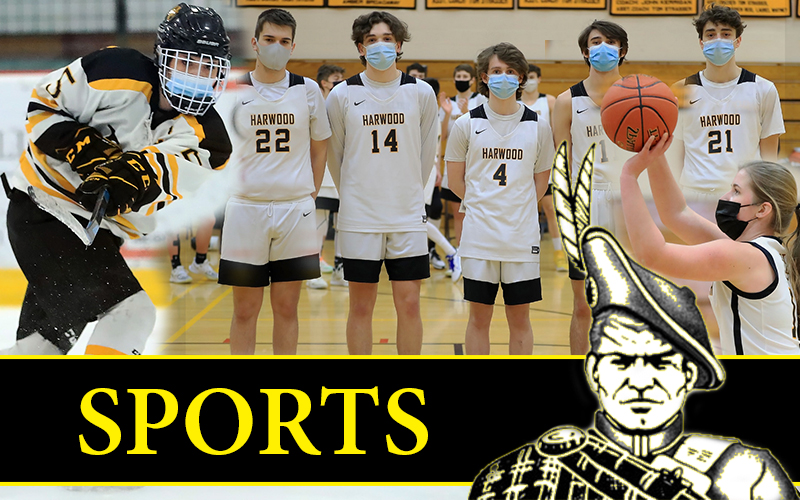 On Wednesday, March 17, the Harwood boys’ varsity hockey team defeated Mount Mansfield with a final score of 8 to 4. Harwood’s Skyler Platt led the team with four goals and three assists. Behind Platt was Finn O’Hara with two goals and two assists. Harwood‘s Jacob Green and Charly Sheitz also scored goals at the game on Wednesday securing the victory for Harwood.

“Our offensive players really showed up tonight, especially when we needed them in the third period,” said Harwood coach Shawn Thompson. “A couple spectacular goals by Sky really helped us close it out. It’s really nice to have players that you count on showing up in a big way.”

“It’s the most goals we’ve given up all season,” Thompson said. “We gave up four against Brattleboro, but one of them was off our own skater. We had to kill two five-minute penalties, which was frustrating. But they weren’t disqualifications. And other than that, we only had one penalty.”

Before the boy’s game against Middlebury, Thompson vouched for their opponent’s strength. “They play a good system; they have a couple solid lines and good defense. And their goalie is good too. They’re not going to give up a ton of opportunities like we got tonight. So, we have to make the most of the opportunities we’ve got,” said Thompson.

However, the Harwood boys ended up beating Middlebury 3-0 at a game on Saturday, March 20. After a goalless first period, the Harwood boys scored two goals in the second period, O’Hara scoring both goals, the first assisted by Jacob Green, the second by Garrett Nelson.

In the third period, O’Hara scored a third goal, cementing a hat trick for the team’s victory, assisted by Green.

In the goal, Harwood’s Liam Guyette finished the game with 29 saves, compared to Middlebury’s Giles Heilman, who had 25 saves.

On Wednesday, March 24, Harwood will travel to Barre for the championship game against Brattleboro at 8 p.m.

(Edit: Harwood lost a hard fought battle against Brattleboro on Wednesday, March 24 by a final score of 5-3)

“These racers proved that hard work and dedication to their sport pays off and they did so while displaying their team spirit,” said coach Katie Westhelle. “Harwood was the only team to have all of their competitors finish both the slalom and giant slalom races. Harwood ended up fourth overall in Vermont. It was a strong display of athleticism and teamwork on conditions that were unforgiving.”

Ultimately, the Middlebury Tigers held out and made their way to the semifinals.

“I felt we had a terrible first period but then really played hard and had many opportunities to win. The girls showed real heart and with any luck we would have moved on,” said coach Mike Vasseur. “It was a great season as the team really bonded well and grew as the season moved on. When you have great kids that like each other and play hard for each other, you really have everything. I was really proud of them.”

Assistant coach Katie Martin also had some reflections on the season. “Harwood had a great season, a season that truly showed that hockey is about being a part of a family, having fun and loving the sport. We started the year with a lot of new skaters, and a lot of people doubted our team’s ability, and we proved them wrong. We played hard this season, each player improved immensely, individually, and we improved in many ways as a team. Though we ended at the quarterfinal round, we put up a good fight and are proud of our student athletes and grateful to have a season this year,” said Martin.

U-32 defeats Harwood girls’ basketball in first round of playoffs

On Wednesday, March 17, the Harwood varsity girls’ basketball team lost to U-32 with a final score of 42-37.

The U-32 Raiders crushed the Highlanders to earn a quarterfinal matchup with top-seeded Fair Haven.

From Harwood, Cierra McKay scored 10 points, Ashley Proteau scored seven, Emma Ravelin scored six and Quinn Nelson scored six. However, this combination of points was not enough to keep up with the U-32 Raiders.

“We played our best game of the year since losing Tanum (Nelson),” said Harwood coach Tom Young. “I was proud of their effort. The opportunities were there and we just needed to make a few more shots. Hats off to Erik’s team. They never quit working and they deserved the win. I wish them the best on Saturday.”

“The senior group is one of the winningest groups in program history for girls’ basketball,” Young added. “Emilee Semprebon played her best game all season tonight. So that’s a tribute to her to be a senior and walk off the court and say, ‘I played my best game all year.’ Sara Bartolomei worked hard all season and she shouldered a lot of responsibilities under the basket. Ashley Proteau is one of the most underrated kids in the state as far as what she does. She’s the benchmark for any kid I coach. We got better from the day she entered as a freshman. She’s made us a winner, but it’s not always her stats that made the difference.”

On Wednesday, March 17, the Harwood boys’ varsity basketball Ttam lost 76-39 to Montpelier. Montpelier led 22-3 after the first quarter and were in front 40-16 entering halftime.

Bellows noted that Montpelier is a strong team. “They play very tough, aggressive, defense and we just didn’t have an answer to it. The seniors played very hard and showed great grit and determination. We were very proud of our guys, all season really, no matter how far down we were, they never stopped fighting,” he said.

“We are poised to have a very tough team next year, and we are excited to hopefully have something much closer to a normal season in 2021!” said Bellows.