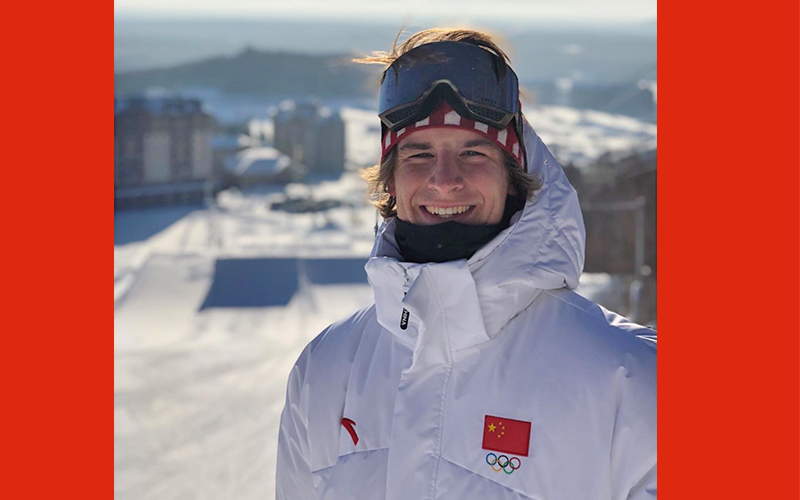 “I didn’t think it was possible. I’d never seen any athlete progress like that in three years, ever. But they really, actually did it. These past three years they got so good.”

In preparation for the upcoming Beijing 2022 Olympics, the Chinese Winter Sports Bureau embarked on the ambitious goal of creating a team for every single winter sports discipline, despite the fact that winter sports like skiing have not been historically popular in the country.

“When they set off to start this massive project, they needed to find coaches. They needed to find athletes,” said Derrick. In a search for skiers, Chinese Winter Sports Bureau representatives knocked on the doors of Kung Foo and gymnastics academies, looking for young, athletic teenagers to transform into Olympians.

“They would go to these places and create little challenges. Once, they had all these kids at a Kung Foo academy step up on a box and try to do a back flip. One of the kids that landed the back flip got picked to join our team!’ said Derrick. One of the girls on the team was a former contortionist.

According to Derrick, the chosen athletes are given the option to join or not. “Most of them say yes, because their families aren’t that wealthy, and they get paid a pretty good salary.”

Derrick’s team was created to prepare athletes to compete in the Slopestyle/Big Air events at the Olympics. Slopestyle skiing involves a combination of jumps, rails and other terrain park features. Slopestyle skiers are judged on the progression and execution of the various spins, grinds, grabs and flips they do off each park feature. Big Air is an extreme version of Slopestyle that usually involves one big jump, where athletes are given an opportunity to do a trick, and judged on their execution of that trick. “If the 2022 Olympics weren’t being hosted in Beijing, I doubt they would’ve ever created the team,” said Derrick.

From the moment these 13- to 18-year-olds are chosen for the freestyle program, the government pays them a salary of $1,200 a month. “Most of them send the money to their families,” said Derrick. Being on the team is truly a full-time job for these athletes. They train six days a week. They aren’t allowed to visit their families. They aren’t allowed to eat food from restaurants or grocery stores. They don’t even go to school.

The reasons for these strict rules vary. Athlete diet regulations spawn from doping concerns. “The food is horrible, but we have to eat it, because right now there’s a huge anti-doping movement in China,” said Derrick. “The anti-doping federation is really trying to make sure no national team gets in trouble. And the problem is, a lot of the meat here has hormones in it. It’s full of human growth hormone that they feed the cows. So, you can actually fail drug tests in China if you eat the meat here. Wherever we go, all our food is sourced and imported, even the snacks” said Derrick.

Even in the precoronavirus era, when the team would compete abroad in Europe or train abroad in New Zealand, all food consumed by the athletes came from China, arriving in special boxes marked with the ski team logo. “Every bite of food they eat has to be sourced through the ski team,” said Derrick.

As for the strict family visitation rules, Derrick explained that, with the Olympics so close, the team managers are putting immense pressure on the athletes to train hard. “They haven’t gone home for over a year,” said Cole. Families are allowed to visit athletes at the training facility for two days at a time, though once an exception was made for a homesick athlete, whose parents were allowed to visit for a week.

“They do this because our boss’s boss’s boss has a lot of pressure. And he doesn’t have the connection with the athletes that we do. He really believes that we need to focus and train hard every day to get there. But for us coaches, we understand that these kids need time to decompress and go home, see their families, and breathe. They need that time to unload,” said Derrick.

Coronavirus has also interrupted the team’s travel schedule, keeping the athletes stuck in a Groundhog Day-like training schedule at their little mountain in Northern China. “They don’t have a normal life at all,” said Derrick.

Since Derrick moved to Baishan, China, nearly two and a half years ago, he too has adjusted to an unusual lifestyle. Before moving to China, Derrick lived a nomadic, adventuresome life in the states. As a kid, Derrick picked up freestyle skiing as a way to carve his own path to ski glory in a family of skiers. His older brother, Miles, had a proclivity for ski racing. “Miles was really into racing, and I thought freestyle would be fun and different,” he said.

After graduating from Harwood Union High School (HUHS) in 2014, he moved out West, spending winters coaching freestyle skiing for the Park City Ski and Snowboard Club (PCSS) in Utah, and summers doing a host of other activities. One summer he spent traveling through Europe. “That was expensive,” he said with a laugh. Another summer he spent with his brother working on a deep-sea commercial fishing boat off the coast of Alaska. In 2018, he spent seven months in Beijing, China, teaching English to kindergarteners. “That’s when I realized I really liked China,” said Derrick.

So, when Derrick was offered the Chinese national team coaching job, he jumped on the opportunity. “My old coach actually got the initial offer to coach the team, but he didn’t want to take it, because he didn’t want to relocate his family to China,” explained Derrick.

Now, Derrick lives out of a hotel and spends his days coaching, in broken Mandarin, his nine pre-Olympic athletes at Wanda Mountain, just across the North Korean border.

This is part one of a two-part story and is part of a series of feature articles The Valley Reporter is running that highlight Harwood graduates and their adventures and successes in the wide world. Nominate someone for the series with an email to This email address is being protected from spambots. You need JavaScript enabled to view it.