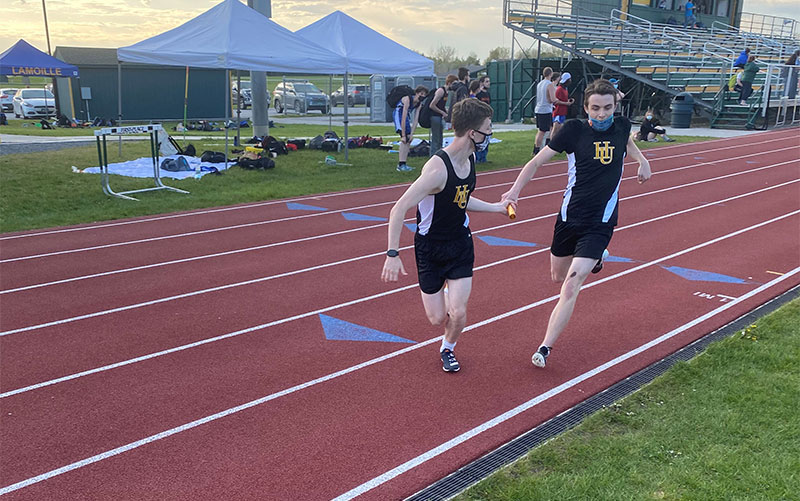 On Thursday, May 13, the Harwood varsity track team competed at a meet hosted by BFA St. Albans at the Collins Perley Sports Complex.

Leading off the meet, the girls and boys competed in the 4-by-800-meter relay. Harwood boys Tyler Silveira, senior; Jonah Busker, junior; Wyatt Popowicz, freshman; Cooper Hansel, freshman, had a time of 10:58.0, placing second overall for a strong start to the meet.

On Tuesday, May 14, the Harwood boys’ varsity lacrosse team played Colchester and won with a final score of 11-8.

“I think we went in expecting an easy win,” said coach Russell Beilke. “What turned out was quite the opposite, down for most of the game, but the boys put together a second half to be proud of.”

Harwood’s Jordan Grimaldi and Finn O’Hara led the team in scoring. Goalkeeper Addison Dietz had nine saves. Sawyer Simmons continued to gather assists, with four in this game alone. “The defense had a great second half, with ground balls winning the face-off battle,” said Beilke.

On Monday, May 17, the Harwood girls’ varsity lacrosse team lost 14-2 to GMVS.

“We had a strong start vs GMVS, our defense was solid and worked together to shut down their drives to goal in the first half,” said coach Hillary Wheeler. “Harwood’s Kaylee Cameron had 11 saves in net. Sophomore Sadie Nordle worked her way through the 8 meter and got a nice lefty shot off for us. Senior Charlotte Cook was our other scorer.”

“A lot of the matches were close,” said coach Seth Mikle. “And we’ll get a rematch with them on the May 28 when they come here.”

“U-32 has a lot of depth,” said Mikle. “They also had an exchange student from Germany, a strong player who hit a ton out of the ball. Our number 1 player stayed with him for a while, but again, when he gains more match experience, he’ll be dangerous!”

On Monday, May 17, the Harwood girls’ varsity tennis team lost 6-0 to Middlebury.

“The Harwood girls rallied to the occasion and played up,” said coach Jo Lynn Ostler. “The match was filled with great court etiquette, skill and strong performances across the board.”

For this match, Harwood’s number one and two players were out ill, along with several other team members. “So, everyone stepped up several notches and really showed themselves well!” said Lynn Ostler.