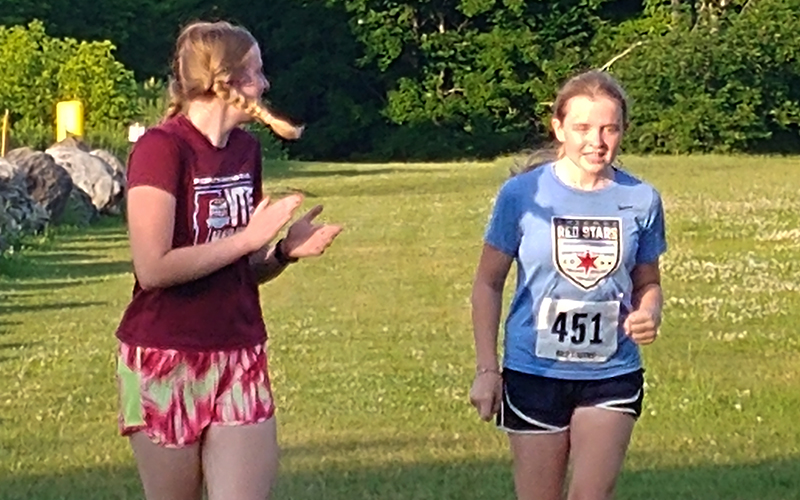 A dozen or more runners braved the heat and humidity and a pre-race thunderstorm to participate in the first Harwood Fun Run of the season on Monday, June 28.

Runners raced on courses of 3km and 5km distances.

Ann Zetterstrom placed first in the walking division of the 3km.

Coach John Kerrigan was quite impressed with the determination shown by Heather Lessor who is a Harwood alumnus. She ran XC and was also an all-state discus thrower who was mentored by the late track coach Taggert Haslam. She is currently a science teacher and the head throws coach for the Harwood track and field team.

She ran a 3km race while eight months pregnant and pushing a baby stroller uphill in 90 degree temperatures and high humidity.

“I was just hoping her super hero efforts would not lead to an early onset of labor. There is poor cell service (could not call 911) and my obstetric skills are poor at best. Any time one of my XC runners complains that the workout is too difficult, I will just show them this photo of Heather and Ryder,” Kerrigan said.

“Ryder seemed to be enjoying being pushed by Mom. I don’t think his pacifier left his mouth once,” Kerrigan added

Harwood Fun Runs take place every Monday on the Harwood cross-country trails. Registration starts at 6 p.m., followed by a kids’ race (½km), 3km and 5km races. The next Fun Run/Walk will take place on Monday, July 5.