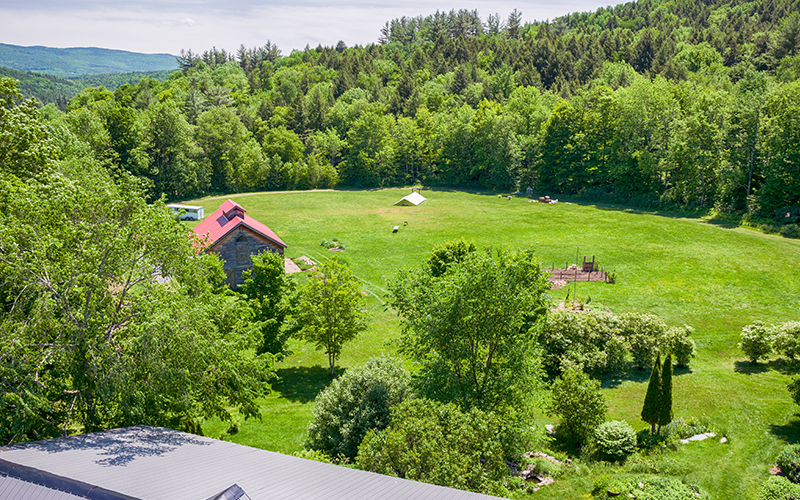 The Waitsfield Select Board was briefed this week on the Mad River Valley Recreation District’s plans to apply for grant funding to build a trailhead, pedestrian bridge and information kiosk to connect Irasville to The Valley’s existing trail network.

That infrastructure would be located behind the Localfolk Smokehouse with kiosk and trailhead behind the building and a bridge over the Mill Brook to connect to the Mad River Riders’ trails on Dana Hill and in the Howe Block of the Camel’s Hump State Forest.

At a July 12 meeting the board heard from rec district director Laura Arensen as well as Mad River Path director Ross Saxton and Mad River Rider’s spokesperson John Atkinson on the effort. The effort is a collaboration between some 20 community groups including those listed above and the Mad River Valley Chamber of Commerce and others whose members are working on letter of interest for a Vermont Outdoor Recreation Economic Collaborative grant.

Arensen explained that the state has received federal funding for these grants and noted that the Mad River Riders have long sought a bridge over the Mill Brook to connect to Dana Hill and the trails it accesses.

She said that the rec district would submit a letter of interest on behalf of the groups by August 27 and that in late September the state would announce those who get invited to submit a grant application. Those applications are due in November.

“We want the select board to be aware and we want to get feedback. We believe we’ll get invited to apply and at that point we’ll ask the town for a letter of support,” she said.

Board member Brian Shupe asked if plans were available that outline where the bridge will go. Arensen referred drawings included in the select board documents that show a bridge towards the back of the field behind the Localfolk Smokehouse.

Atkinson clarified that the bridge will be about halfway around the field – if the field is an arc and said that the group will send a map that shows more specifically where the bridge is likely to be.

Shupe said that he was impressed and pleased with the project and the level of trail development that is underway in The Valley. He asked if those working on the grant and trails had been working with the state on making sure trail development is compatible with wildlife corridors and watersheds.

“Have you guys connected with our conservation commission to make sure we’re looking at the bigger picture?” Shupe asked.

“The Warren Conservation Commission asked the same questions about this and we’ve begun to talk about that. We hope to have a community planning event to balance the economy, our future and the environment,” Arnesen said, adding that the Mad River Valley Trails Collaborative would like to host that event.

The Mad River Path’s Saxton said that his organization and the trails collaborative are diving into that.

“What we’re looking to do is have a broader picture. We’ll have a lot more to tell you in the next several months,” Saxton said.

“We work extensively with large public land partners who are very aware of what we’re doing and have huge amount of oversight over what we do. We’re working extensively with water quality and habitat. This larger exercise with the entire Valley is an important next step,” Atkinson said.