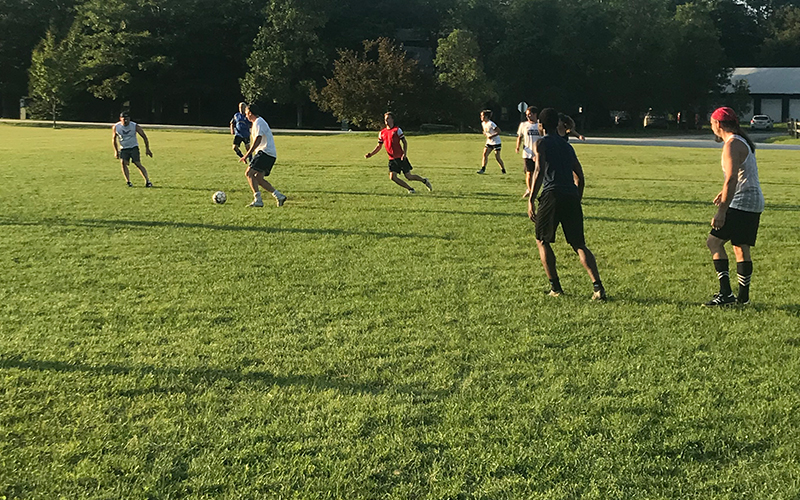 On Monday and Thursday evenings in the summer, grown-ups convene at Mad River Park, Waitsfield, to play soccer. The Old Folks Football Club (OFCC) has been playing pick-up soccer every week since 2017. The group has since grown to play twice a week, starting at 6:30 p.m. The crew can usually be found enjoying a beer or a swim together after the friendly match.

League founder Dave Busker, Moretown, said he started the club because, “I was just really feeling the itch to get some folks together and have some fun and get some exercise… It’s been unbelievable. We like people to come out and have fun, nobody shames anybody else on their ability. We just all get together and have a good time. There’s camaraderie and exercise and all different skill levels, different age levels. Everybody’s here for a different reason, but the same reason, which is to have fun.” He also noted that some of his closest friendships in recent years have started at the OFFC.

Forty-four players are registered on the league’s page on playerlineup.com, though an average game is in the range of 10 to 15 players, with as many as 19 players at a recent game. Games are informal, played on short fields with moveable “Pugg” goals; no one keeps score. Though the league was originally founded with players ages 35 and up in mind, that has relaxed in recent years to accommodate younger players. It’s a mix of experienced soccer players and beginners. The club is mostly comprised of Valley residents, with a few Waterbury participants. Ages range from late teens into 60s and play is casual.

Life LeGeros, Duxbury, has been coming to the OFFC for three years and said, “It’s just a great game. Cross-generational, cross-racial, just a diverse, wonderful group of people.” He credits Busker with bringing people together and setting the friendly tone of the game. He also enjoys that players have fun socializing post-game, too.

Lisa Mason, Moretown, played soccer when she was younger and was looking for fun exercise in the area. This is her first summer coming to the OFFC. She also said, despite being a longtime resident of The Valley, she’s met many new people through the club. “There’s no commitment, there’s no barriers,” she said.

Killian Leese, Waitsfield, has been coming to OFFC matches for two years. “It’s fun to have the activity and the competition, a friendly group of people who just really enjoy playing soccer,” he said.

Anyone interested in joining can sign up at oldfolksfootballclub.playerlineup.com, which is updated regularly with announcements, an RSVP list and last-minute changes due to weather. In years past, the club has moved indoors for the winter, playing at the Sugarbush Health and Recreation Center, and Busker said, they hope to be able to play there again this winter. 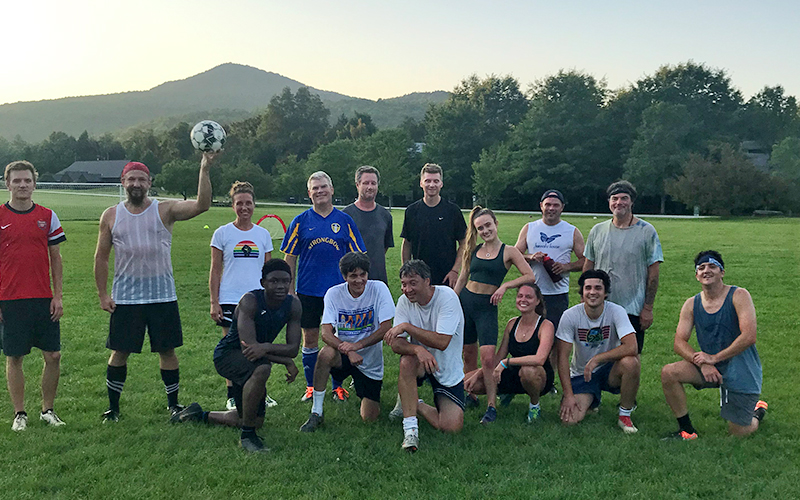