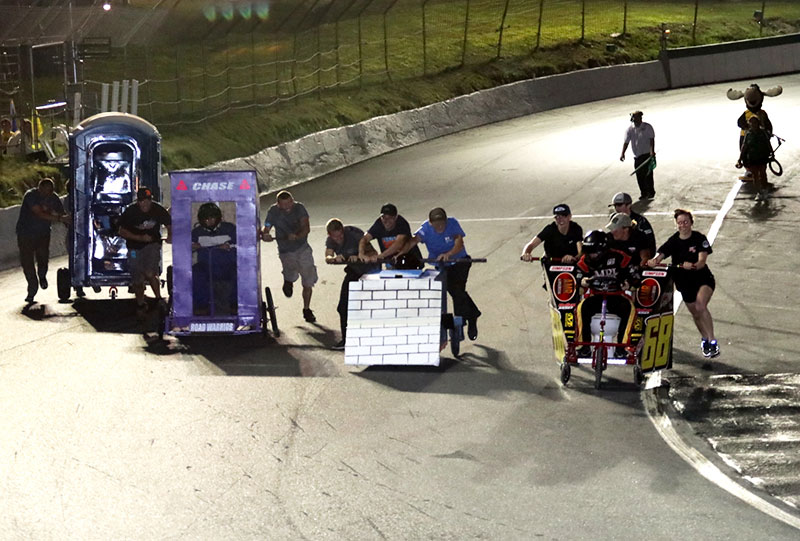 The Thunder Road weekly racing season nears its apex this Friday, September 10, at WDEV Radio/Calkins Portable Toilets Night. The special Friday night event on FloRacing, which was originally scheduled for late July, is the next to last point-counting event of Thunder Road’s 62nd season.

That means everything is coming to a head in the Maplewood/Irving Oil Late Models, Lenny’s Shoe & Apparel Flying Tigers, RK Miles Street Stocks and Burnett Scrap Metals Road Warriors. Point leaders Jason Corliss (Late Models), Mike Martin (Flying Tigers), and Kaiden “Tropical Storm” Fisher (Street Stocks) have two events left to hang on to the top spot. Their challengers have two chances left to catch them. There will be no “saving it for later” because later is now.

The night won’t be without some fun, though. Friday’s program includes the long-awaited return of the “Port-a-Potty” Grand Prix, pitting one driver from each division against each other in rolling outhouses. Christopher Pelkey, the Late Model point leader at the time of the original event date, will represent that division. Mike Martin is the Flying Tiger entry, Kaiden Fisher and Davis Martin Racing will tag-team the Street Stock porta-let, and Nate “Tater” Brien has his Road Warrior potty ready to mash the competition.

Once the Port-a-Potty Grand Prix winner breaks the line of toilet paper, things will get serious. In the Maplewood/Irving Oil Late Models, Barre’s Jason Corliss has completed his comeback from a last-place finish on double-point night. He now holds the Late Model record for most weekly feature wins in a season and with a 25-point lead over Graniteville’s Pelkey, Corliss has a great shot at his third straight “King of the Road” crown.

But it’s not over yet. Corliss’s torrid stretch the last four events means he will be starting way out back on Friday. That gives Pelkey a chance to make up some ground and create a real nail biter at Efficiency Vermont Championship Night on September 17. Both are also trying to sew up strong results in the New England Late Model Challenge Cup, with Corliss leading those standings and Pelkey sitting in sixth.

The battle for the rest of the top-10 is fierce, too. Shelburne’s Trampas Demers has climbed to third but has only a seven-point edge over Danville’s Tyler Cahoon. Meanwhile, fifth-place Kyle Pembroke is just 30 points ahead of 11th-place Chip Grenier. Only 10 drivers get an invite to the Banquet of Champions, so the pressure is on to capture one of those spots.

The closest championship shootout is in the Lenny’s Shoe & Apparel Flying Tigers. Michael and Stephen Martin, the father-son tandem out of Craftsbury Common, have been one-two in the standings since the Midseason Championships. Mike took the point lead back from Stephen at Sunday’s Labor Day Classic, but he is only six points ahead of his son.

Fourteen Flying Tiger features have produced 12 different winners this season. As such, there is plenty to watch beyond the Martin family feud. Hinesburg’s Derrick Calkins has made it up to third in points but is still looking for his first win of the year. Hardwick’s Jaden Perry is having the best start-to-finish season of his Thunder Road career with two wins and consistent top finishes. Bryan Wall Jr., Sam Caron, Robert Gordon and Labor Day winner Colin Cornell are other racers to watch.

After a solid effort in Sunday’s RK Miles Street Stock double features, Shelburne’s Kaiden Fisher is on the verge of becoming the youngest track champion in Thunder Road history. Fisher will be 13 years, 356 days on Championship Night. This would obliterate the record set by Stephen Martin in 2018 when he won the Street Stock title at age 16.

With two races left, Fisher is 43 points ahead of new second-place runner Kyler Davis. Although Berlin’s Davis would need some help to make up that deficit, it’s certainly not impossible, as a Street Stock driver can gain 72 points in a single event. Kyler’s DMR teammate Jeffrey Martin has authored the comeback of the season, rising to third in points after being as low as 21st. The back half of the top-10 is a dogfight as well with Josh Lovely, Justin Blakely, Jamie Davis and others jockeying for position.

The Burnett Scrap Metals Road Warrior division is back on the rise with growing fields at the last two events. They continue to put racers on the map as Worcester’s Rodney Campbell became the sixth first-time Warrior winner of the year on Sunday. Potential drivers who could become number seven include Dan Garrett Jr, Matt Ballard, Taylor Sayers and Bill O’Connor. To do so, they’ll have to beat elite Warriors like Nate Brien, “Flyin’” Fred Fleury and Josh Vilbrin mano-a-mano for 20 laps.

Thunder Road is home to WDEV Radio/Calkins Portable Toilets Night this Friday, September 10, at 7 p.m. All four local divisions are on the card for the final prelude to Championship Night. The program also features the annual “Port-a-Potty Grand Prix” portable toilet race. The pits open at 3:30 p.m. and the grandstands open at 5:15 p.m.

Admission is $15 for adults, $5 for kids ages 6-12, $30 for a family of four (2 adults, 2 kids) and free for kids ages 5 and under. Advance tickets are available at www.happsnow.com/event/thunder-road-speedbowl. The event will also be televised live on FloRacing for those with a paid subscription.

For more information, contact the Thunder Road offices at (802) 244-6963, This email address is being protected from spambots. You need JavaScript enabled to view it., or visit www.thunderroadvt.com. You can also get updates on Facebook, Twitter and Instagram at @ThunderRoadVT.