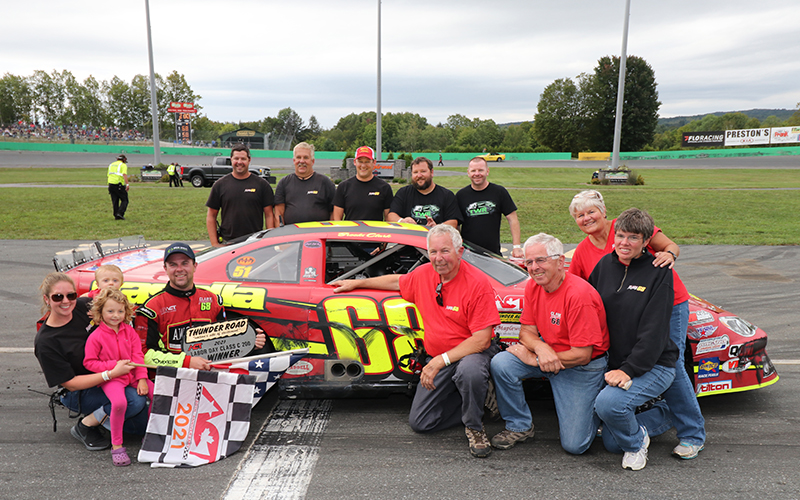 Fayston, VT’s Brooks Clark continued his rise among the American-Canadian Tour (ACT) elite by pulling the season sweep at Barre, VT’s Thunder Road on Sunday, September 5. Clark took the lead from North Haverhill, NH’s, Derek O’Donnell with 23 laps remaining in the 43rd Optical Expressions Berlin Labor Day Classic 200 and never gave it up to bank the $5,000 top prize that came with the victory.

O’Donnell had led the event ever since a lap-three caution for Kyle Pembroke’s turn-three slide for life. After he had gotten the lead from Matt White, O’Donnell and Jimmy Hebert led a breakaway from the field until Gabe Brown tagged Jason Corliss to bring out the caution with 69 laps complete. Two more quick yellows followed, which culminated with a turn-three melee involving Cody Blake, Tyler Cahoon and Cooper Bouchard on lap 84.

Those yellows allowed Christopher Pelkey, Bobby Therrien and Clark to enter the conversation. O’Donnell kept all of them in his rearview mirror until the next caution on lap 118 when ACT point leader D.J. Shaw had a flat right front tire. Therrien was one of a handful of cars to gamble on taking fresh right-side tires during the caution. However, the move backfired as Therrien got tangled up with Jimmy Renfrew Jr. and Derek Gluchacki on the backstretch seven laps later.

Following the seventh caution on lap 134 for another hard wreck that saw White climb the turn one wall, things got serious at the front. With laps winding down and the potential for rain, Herbert gave it all he had on the outside while Clark put the heat on down low. Once his bid for the lead failed, Hebert was initially able to get in line with the second spot -- until Clark pinned him behind a lapped car a few circuits later.

Clark then set his sights on O’Donnell. He first looked to the outside with 35 to go, keeping a fender alongside for several laps before having to drop back. After gathering himself for another charge, Clark ducked beneath O’Donnell coming off turn four to complete the 177th circuit. O’Donnell tried to slam the door entering turn one, but Clark kept his foot in, and O’Donnell ended up sideways. Clark backed off enough for O’Donnell to regain control and then scooted through to the top spot.

Behind them, Pelkey had been able to get past Hebert for third. He then took a try inside O’Donnell --  but broke loose with 16 laps to go and spun to bring out the final caution. Hebert stuck the nose inside O’Donnell on the restart for second, but by the time he had gotten clear for the spot, Clark was already gone. Corliss then snaked past O’Donnell and got into a side-by-side battle with Hebert for second, which sealed the deal for Clark.

Thunder Road resumes weekly racing this Friday, September 10, with WDEV Radio/Calkins Portable Toilets Night at 7 p.m. The event includes a full card of action for all four Thunder Road divisions plus the annual “Port-a-Potty Grand Prix”. The pits open at 3:30 p.m. and the grandstands open at 5:15 p.m.

Advance tickets are available at www.happsnow.com/event/thunder-road-speedbowl. The event will also be televised live on FloRacing for those with a paid subscription.

For more information, contact the ACT offices at (802) 244-6963, This email address is being protected from spambots. You need JavaScript enabled to view it., or visit www.acttour.com. You can also get updates on Facebook and Twitter at @ACTTour.