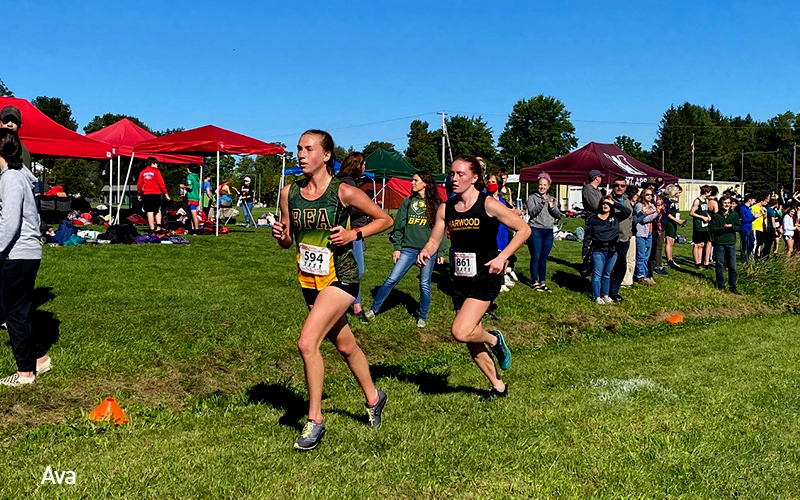 Harwood girls took the fast road race-like course at Vermont Technical College in stride last Saturday as they dominated in the 16-team event.

Although their training has been mostly on the hills of South Duxbury and the Mad River Valley, they crushed elite Division 1 teams from Chittenden County on the flat Vermont Technical College course.

“It was more like a track meet,” said some of the Harwood competitors. Harwood team co-captain Britta Zetterstrom (one of the top 400-meter runners in Vermont track and field) performed well on the mostly flat and mostly paved course placing sixth overall.

For the second week in a row Harwood’s Ava Thurston (2019 Gatorade Runner of the Year) was defeated by BFA track standout Logan Hughes. At the Essex Invitational, Logan defeated Ava by 11 seconds. This week it was by a mere half a second. Thurston actually overtook the BFA soccer crossover 10 meters before the finish but Hughes passed the Harwood runner in a final burst at the finish.

“They will be fun to watch next Saturday when we finally get to compete on a hilly course. The Catatmount Family Center in Williston will host the Burlington Invitational. The terrain at Catamount is very similar to our training grounds of South Duxbury,” said Harwood coach John Kerrigan.

“I was very pleased with our boys’ performance. Finishing only four points out of sixth with such a young team was impressive. I saw Cooper and Noah running through Waterbury often this summer. Looks like it is paying off,” said Kerrigan.