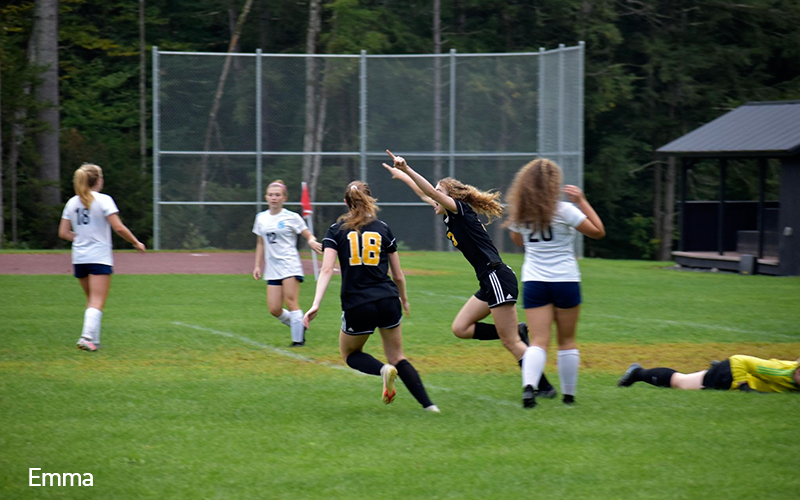 Every two years, coaches get the option to change up their non-league opponents. Going into this year, coach Mike Vasseur knew he scheduled a rigorous non-league slate to push his team, challenge his team and to give an opportunity to play against talented teams from Division 1.  Thursday, September 9, gave Vasseur a first look at how his team would handle this approach and he had to have been pleased as his Highlander girls’ soccer team played Mt. Mansfield to a 1-1 draw.

Mt. Mansfield came out and quickly set the tone and pace. They both dominated possession and played a physical game as the Highlanders fell back on their heels. It was a back and forth first half until with just under 9 minutes to play, Mt. Mansfield broke through with the first goal of the game. Sydney Sears assisted Sabrina Goslin as she lofted a shot over Harwood’s goalie, Ciera Fiaschetti, from 30 yards out. This would prove to be the only goal either team would get in the first half.

The second half was a much more even contest as far as possessionm and Harwood may have even had the edge (time of possession) by the end of the game, Vasseur said. “At halftime we talked about quickening our play, lessening our touches, working together as a team more and talking more.” We just wanted to be quicker, faster, stronger -- and to get some balls through at angles and not just to kick everything long. And I thought in the second half we played very well.” The Highlanders’ hard work paid off as senior striker Emma Ravelin followed up a deflection from the MMU goalie and put it in the back of the net to tie the score at 1. “It was a classic Emma goal,” Vasseur said. “She works really hard and she gets into the really crowded, contested areas. And that’s where she’s good. We’ve been very lucky to have her for four years: She’s just an awesome kid and a good soccer player.” The second half continued to be a back-and-forth battle with Harwood coming up just short of the go-ahead goal several times. Junior midfielder Lousia Thomsen cracked a shot, with 9 minutes to go, that smacked off the upper left corner of the goal. The second half ended with Fiaschetti making a few great saves to send the game to overtime. “Ciera (Flaschetti) just came back from an injury that she got at the start of the winter season last year,” Vasseur said. “She was on our JV team last year and really worked hard. And she’s exactly what we’re looking for. She’s starting to talk more and really owned the field.”

Overtime was filled with opportunity for both teams that kept both sides of the crowd on edge. During the extra time Harwood had solid shot attempts by Cierra McKay, Tanum Nelson, and sophomore Tessa Jernigan set up a chance for Ravelin with a great corner kick cross.

“We’re starting three new backs,” he said. “Ruby Murphy played well and Francesca (Campanile) stepped up in her first game for us. Addey Lilley and Carmen Lafayette showed well. Abby Young is our rock and our only returning starter from last year. Scout (Vitko) and Mae (Murphy) did really well. And we basically rotated through eight backs.” Vasseur added, “coming in I was excited to see what our young defense and goalie could do. To limit a D1 team to 1 goal is a great firstst impression.”

“It was a great start and I think this was one of the things we missed last year because we missed the first half of the season,” Vasseur said. “Games like this really show you what you need to work on, and that’s excellent for us. It’s exactly what we needed. I thought the girls could have given up when we got one goal down, and we didn’t. We fought back and then we had some great opportunities and just couldn’t get the ball across the line. But there was no ‘Give up.’ It was just ‘Keep going.’ And you can’t be anything but happy about that.”

The hills and valleys of South Duxbury usually don’t see this many shots until the first weekend of deer season. The Highlanders came out firing and determined to score some goals (six shots in the first two minutes). The Highlanders dominated the match from start to finish with contributions from up and down the roster. The scoring combination of Tanum Nelson (senior) to Louisa Thomsen (junior) and “Weez back to ‘T’” accounted for six of the 11 goals. The scoring didn’t stop with just these two. Junior Cierra McKay had a goal in the 13th minute to make it a 3-0 game. Sophomore Tessa Jernigan chipped in two goals of her own. Senior Emma Ravelin continued her goal-scoring ways with another goal late in the second half. The scoring capped off with Maeven Cattanach (junior) scoring her first career varsity goal. Coach Vasseur was psyched for the team and for Maeven. “It was a great team game, team win and a lot of unselfish play by all,” said Coach Vasseur. I was excited to see Maeven get her first varsity goal. She had a lot of success with the JV team last year and I am psyched to see it at this level too.”

Cierra Fiaschetti continued her superb early season net minding with a shutout for the first 40 minutes. Poppy Woods had the same success in the second half as the Highlander keeper. The defense kept up the tone they set with the MMU game by not allowing a shot on goal the whole game.

Coach Vasseur seemed very pleased with the outcome of the first two games and added, “We are off to a great start and seeing so many positives all over the field, I was happy that we didn’t overlook this game coming off an intense game with Mt. Mansfield. I expect us to take this momentum and run with it as we head up to Lamoille on Tuesday of next week.” The Highlanders improve to 1-0-1 on the year.

Hyde Park: The Highlanders picked up right where they left off on Saturday. Tuesday’s game against the Lancers of Lamoille had Harwood dominating both sides of the ball and posting another shutout. The Harwood squad has scored 21 goals and yielded one goal through three games. Goalies Ciera Fiaschetti and Poppy Woods split time (Fiaschetti getting the start) in net. Offensively, it was again a total team effort. Senior striker Emma Ravelin scored a goal in her third consecutive game (two goals and one assist). Her first goal opened the scoring when she capitalized on a beautiful through ball from sophomore Scout Vitko. “It is always nice to open the scoring with your defender finding your striker and feeding her in the open field. It’s that kind of team play that can make us so dangerous,” said Vasseur (Harwood). The generosity didn’t stop there. Senior midfielder Tanum Nelson had four more assists and three goals to go with it. “Tanum was really looking to find her teammates today and made some beautiful passes to set up her sister (Quinn Nelson) on a give-and-go on another perfectly placed ball to Maeven Cattanach,” added Vasseur. It was the second game in a row that Cattanach has come off the bench and found the back of the net. Sophomore Tessa Jernigan continued to contribute from both the wing and when she was at center midfielder. Jernigan added a goal and had a handful of beautifully-placed passes and crosses that led to several great opportunities for the Highlanders. Eloise Lilley, a frosh striker, added her first varsity goal late in the first half as well. Highlander’s midfielder Louisa Thomsen also contributed two assists in the match.

Coach Vasseur was very pleased after the match. “It is great to get through the first three games, relatively healthy and getting contributions from so many different players. I thought today we showed patience early and really turned it on as the game progressed.” The Highlanders are now 2-0-1 and will face U-32, away, on Saturday, September 18. That game is slated for a 7 p.m. start.