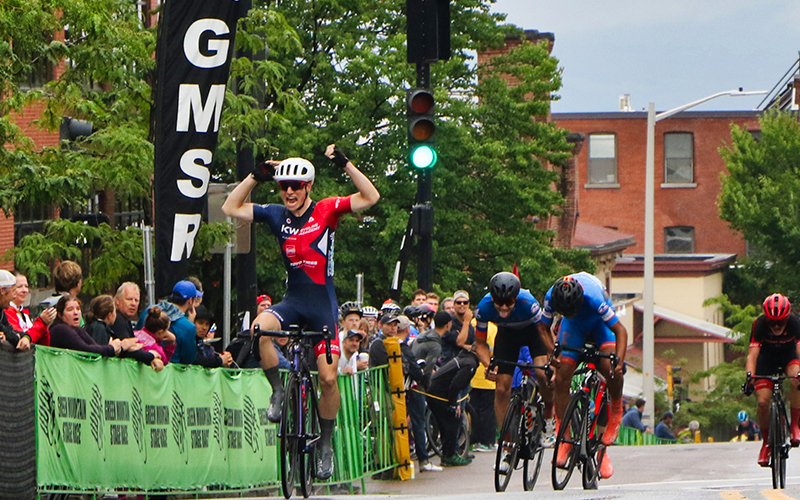 After canceling the GMSR for 2020 because of COVID the event returned to Vermont for a 20th anniversary celebration. There was a very strong turnout from racers who were looking for an opportunity to get back to racing.

“While over 500 racers competed this weekend that number would have been substantially higher if the border with Canada had been open allowing the large and close by population of riders to compete. We will hope that life will be more back to normal in 2022,” explained race director and founder Gary Kessler.

There was some fun and thrilling racing that took place over the four days of the event. There were some great performances by Vermonters as well. In the women’s Pro Stage 4 Burlington criterium Kaitlyn Agnew of Montpelier won the hearts and cheers of the spectators lining the course with her long-distance solo breakaway effort. With 10 laps to go in the 30-lap race, Agnew launched her attack. She quickly built a 15-20 second gap over the field. As the race moved into the final five laps the field started to chase her in earnest and were slowly pulling her back. Each lap the announcers and the crowd cheered her on encouraging her to push harder. With one lap to go, the gap was down to less than 5 seconds as the pack nipped at her back wheel. She did not give up and sprinting up the hill on Main Street for the final time she was able to hold on and take the win by less than 0.5 seconds.

“This was the most exciting race of the day on Monday,” Kessler said.

In the men’s 4/5 Master’s race, Rick Sorenson of Rutland won the King of the Mountain’s competition. Winning this competition is a major accomplishment for any racer as it means that the racer was the best climber in their race. Soreneson was racing against a field of racers age 30-plus.

“What makes Rick’s accomplishment so impressive is that he is 66 years old! Speaking to his much younger competitors nearly all of whom could have been his children, they had nothing but respect for accomplishment,” Kessler explained.

Finally, there were two racers, David Taylor and David Connery (from Vermont) who were recognized as they have competed in all 20 editions of the GMSR. They were called to a prime spot on the starting line on Stage 4 and awarded a custom Vermont Teddy Bear to commemorate they incredible 20-year streak of races.