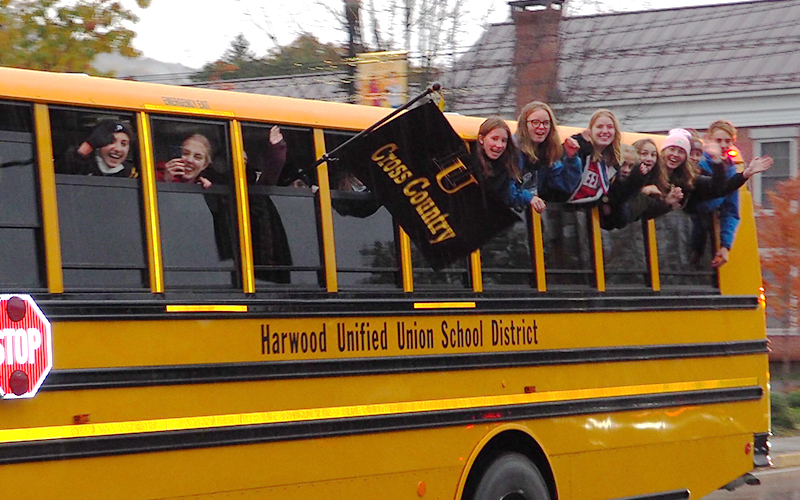 The Harwood girls’ cross-country team took home the state trophy for Division 2 over Halloween weekend despite the rain. They were celebrated with a fire truck escort in Waterbury on Saturday. Senior Ava Thurston snagged first place with a 5K time of 19 minutes and 29.4 seconds, securing her fourth individual title. Five Highlanders placed in the top 10, including Britta Zetterstrom, Charlie Flint, Julia Thurston and exchange student Elisa Clerici. They will race at the Vermont Meet of Champions on Saturday in St. Albans and are looking ahead to the New England championships.

Sophomore Jordan (“Jordi”) Hunter teed off at the New England championships in golf this week. She tied for 39th place overall and was seventh out of Vermont competitors. “Jordi had an amazing season and experience at New Englands. She is also very excited for next season when Harwood Union will have a full girls’ team. For anyone playing golf for such a short time I couldn't be prouder of Jordi!” said coach Brian McCarthy.

Last week, the Harwood field hockey team won the Division 3 quarterfinals game against North Country Union High School 1-0. Harwood’s Lucy Sullivan scored the only goal of the game in the third quarter. The Highlanders faced off against Lyndon Institute for the D-3 semifinals on Tuesday and lost 0-2.

The boys’ soccer team defeated Missisqoui Valley Union 4-0 last Thursday and came out on top, 4-1, vs. GMVS in the quarterfinals. Jordan Shullenberger secured the record for most goals in a single season, beating the previous record of 26 with a total of 28 goals this season. Harwood was defeated in the semifinals, 0-1, vs. Montpelier on Tuesday.

After a postponement due to weather, the girls’ soccer won their first playoff game 7-0 vs. Otter Valley last week. They progressed to the quarterfinals on Saturday, defeating Middlebury 2-0. At the time The Valley Reporter went to press, they were preparing for their semifinal game against Rice Memorial High School on Wednesday at Harwood Union High School. (UPDATE: The Harwood girls' lost to Rice 3-1.)