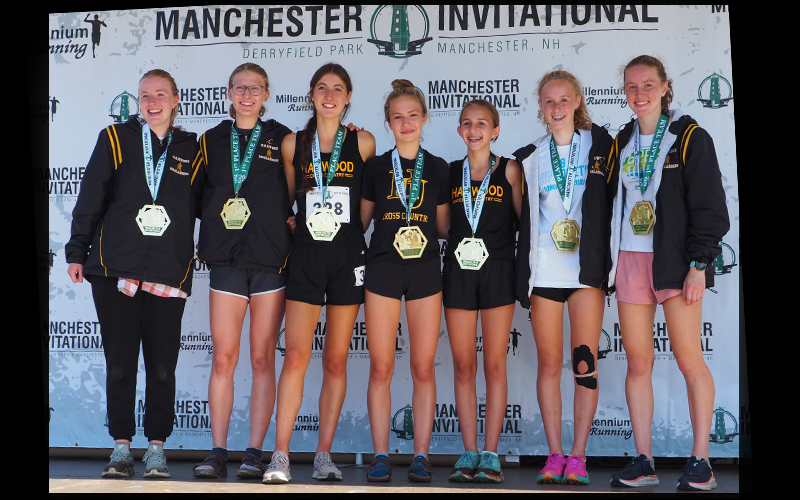 In the previous two weeks leading up to the New England’s, Harwood girls had won the Vermont Division 2 championships and the Vermont Meet of Champions.

“We had beaten the Rhode Island state champions (North Kingston) and the New Hampshire state champions (Dover) earlier in the season. We also suffered a one-point loss to the Maine state champions (Bonny Eagle) at the Maine Festival of Champions. I knew going in that we had a good chance for a top-10 finish. However, the Connecticut teams are very strong. I thought that there were at least four CT teams better than us. Also, the scouting report we received stated that the RI and NH teams were vastly improved from when we faced them in mid-September,” John Kerrigan, the team coach said.

“We did not let up in our training after the state meet. Our goal was to tie or surpass the best finish by a Harwood team at the New England’s -- (HU boys finished seventh in 1999 and 2000) For the first time all season our top five girls were healthy. Several had battled back from illness and injuries,” he added.

“Our fifth-place finish was not only the best by any Harwood team but also the best finish by any girls Division 2 team at the New England’s. We were the smallest school from the smallest state. I told the girls it was going to be like David vs. Goliath,” said the coach.

The final statistics showed that:

Harwood girls beat all of the teams from Rhode Island and New Hampshire.

“Our girls beat teams from schools with two or three times the enrollment at Harwood. We could call ourselves New England Small School Champions,” but we competed well on the larger stage,” Kerrigan said.

“Our total team time was faster than every other team except eventual winner New Milford, CT,” he pointed out.

New Milford has a school population of 1,600; the second-place team, Bonny Eagle of Standish, Maine, is one of the largest high schools in the state of Maine with 1,100 students. Third-place finisher, Glastonbury, CT, has over 2,000 students. Harwood with less than 500 students placed fifth. I would say that David stood strong and held his ground vs. Goliath!”

“A good measuring stick for a XC team’s performance is the placement of their fifth runner. Our fifth runner, Julia Thurston, beat the fifth runner from both the second- and third-place teams,” said Kerrigan

“I would like to thank the parents, especially those parents of seniors that have supported our team the past four years. Thank you for your attention to the details; concessions, transportation, especially during the COVID epidemic. You allowed us coaches, to just coach,” he added.

Kerrigan also thanked Harwood athletic director Chris Langevin who arranged for a fan bus to travel with 50 of the girls’ classmates to Thetford.

“However, it was her leadership, along with team co-captains Zetterstrom and McDonough, that made our team so successful. Their leadership and caring for all of their teammates are the reason why we have such a great team. Your example has made this a very special season. One that we will never forget.” said members of the coaching staff.

The future looks bright as well for the Harwood girls’ XC team they will return eight of their top 12 runners for the 2022 season.