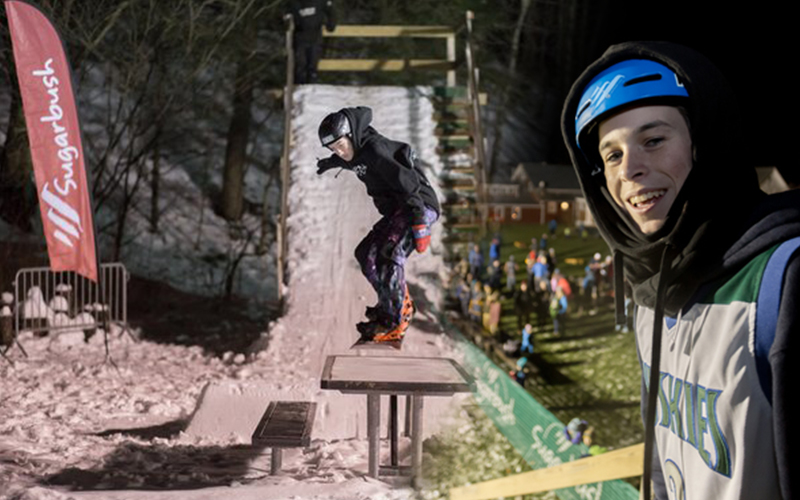 Twelve years ago, Eric Friedman, then marketing director for Mad River Glen, visited Crested Butte, Colorado – his purpose: to present on cooperative mountain ownership to their ski community with hopes of inspiring another resort to follow Mad River Glen’s example.

Crested Butte ended up choosing corporate ownership, but Friedman’s trip was not in vain. Upon returning to The Valley, Friedman himself was inspired to bring a ski season kickoff party to the Mad River Valley, like the one he had experienced 2,000 miles away in Colorado.

And so, the Big Kicker was born.

Over a decade later and after a year of postponement due to the pandemic, the Big Kicker will return for its 11th year running this Saturday, November 20, at Lincoln Peak.

First held in 2010 at the Big Picture – hence the name Big Kicker – it was originally planned to coincide with the annual ski and skate sale, “a kind of traditional kick off to ski season” remembered Friedman – the intention being to provide the local community a space to gather and get excited about the onset of winter before the tourists arrived – in the gray fall weeks of stick season. Friedman is now the director of the Mad River Valley Chamber of Commerce.

“The original intent was obviously kind of a stoke machine to drive excitement for the winter season,” said Sugarbush marketing and communications director John Bleh, “and to do it, you know, not just for the mountain but also for the community,” he continued.

Since its founding, the event has been held at the Big Picture, Lareau Farm and Mount Ellen, each year featuring live music from a chosen band, local beer sponsored by Waitsfield’s own Lawson’s Liquids and a rail jam put on by Sugarbush Parks. It has also incorporated a philanthropic component with booths featuring the Ryan Hawks and High Fives Foundations, as well as VT Adaptive in more recent years.

This year, the same can be expected – although the rail jam will be weather dependent – the only planned change, is that in line with Sugarbush’s COVID-19 policy: masks are required indoors, when not seated.

As with years past, the entirety of the event, aside from the bar and raffle tickets, will be covered by in-house funding – it has been, and continues to be an event aimed at fostering community stoke for the upcoming season.

“It’s all paid for by the resorts,” said Bleh. “It’s really just a way to sort of celebrate the kickoff of the year.”

“We don’t see ourselves as competitors” said Bleh, “we think we’re kind of complement products and service different groups a lot of the time, so we love being able to partner with [each other].”

“Working with Sugarbush to do [the Big Kicker], it’s just a great way to highlight the teamwork between the two mountains” echoed Mad River Glen general manager Matt Lillard, “we all very much see ourselves as a big team in promoting The Valley and getting people skiing.”

“I was always looking to collaborate with Sugarbush” said Friedman of his goal in creating the Big Kicker; and “[a preseason party] was a really good way to bring the ski communities together.”

But beyond this, Friedman expressed his belief that this event also serves as a tribute to the tightknit and unique ski community of the Mad River Valley, and the single, but remarkable ridgeline – boasting three mountains, two resorts, and endless terrain – upon which it has been built.

Lincoln Peak, Mount Ellen, and Mad River Glen are “strung along the spine of the Green Mountains like a string of pearls” Friedman commented,

“I think that the Mad River Valley is unique in that it has three ski areas, or two, depending on how you look at it,” said Friedman, “no other resort area in New England has that, and we think the Big Kicker is a great way to celebrate.”

Today, November 18, Sugarbush plans reveal whether Saturday will mark its opening day or not.