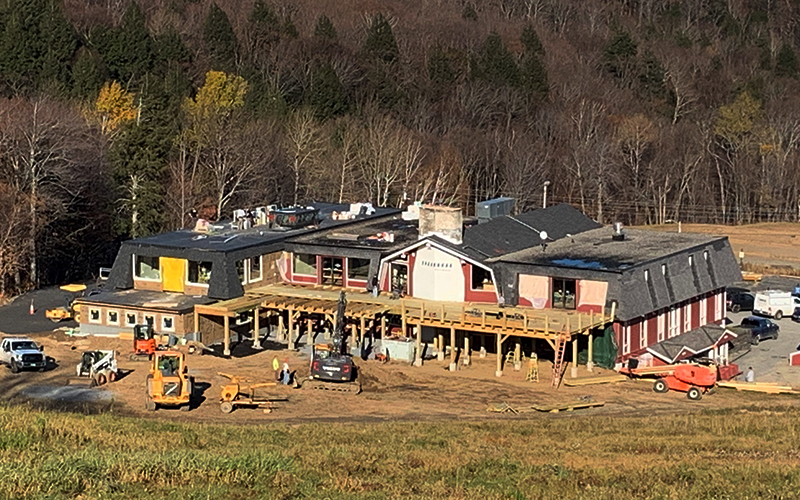 After three years of planning and construction, this second permanent home of Vermont’s largest adaptive sports program – a 4,000-square-foot addition to Mount Ellen’s base lodge – is in its final stages.

Built in the 1960s, a decade before any disability specific legislation was passed, Mount Ellen’s lodge, like many buildings of its time, had long lacked accessibility.

This has greatly changed with the construction of VASS’s new facility.

Previously having committed 400 square feet of makeshift space on the main floor of the lodge for VASS operations, the lodge provided access to just one straight-in entry point enabling wheelchair access, one handicap accessible bathroom and very limited space to accommodate additional needs of participants.

With the completion of this addition, VASS will now operate in an accessible space 10 times as large. This will include gear storage, locker and changing rooms on the bottom floor, offices, programing space and ski-in/ski-out access on the main level, and sensory, service dog and Veteran Ventures rooms, a Cabot-sponsored kitchen, multipurpose space and access to an expansive deck on the third floor – all three levels will have accessible restrooms.

As of Saturday, November 6, interior and exterior painting remained along with appliance installation, including that of an elevator which will service each level.

This project has occurred alongside improvements to the Mount Ellen base lodge itself. The two are growing together, marking the creation of a new, accessible and integrated space.

“Integration was a goal we wanted to keep moving forward,” said Felicia Fowler the northern coordinator for VASS,VA “it’s an important part because many people come with friends and family, and they don’t necessarily want to rely on the [VASS] program all the time.”

The finalization of the Mount Ellen VASS facility marks the completion of phase two of three – the first being at Pico and third on the Burlington waterfront – of the permanent establishment of VASS locations across the state.

After experiencing COVID delays, the success of this project speaks to the patience, collaboration, and adaptability of VASS and Sugarbush over the last three years, Fowler said.

“It’s been an ongoing process” said Fowler, “but it’s given us more time to you know, dial everything in.”

A $2.5 million project, VASS is still looking to raise the final $250,000 to meet its fundraising goal. Construction will continue just the same with ski season right around the corner.