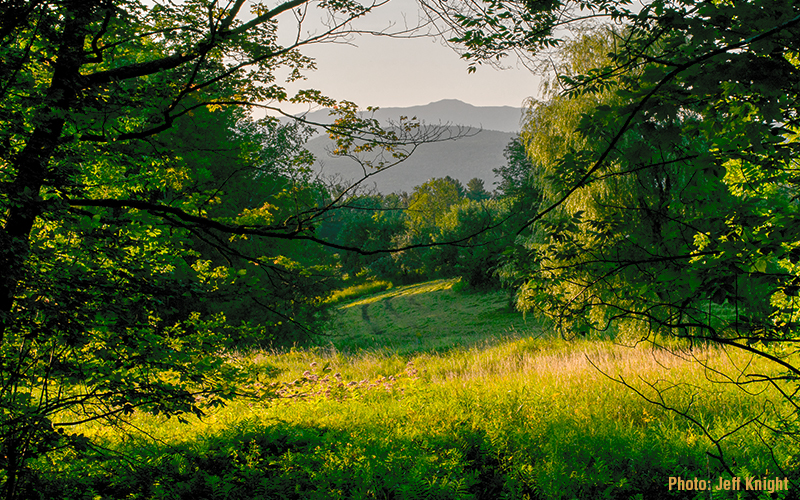 Friedman made those comments this week while hosting a November 15 community forum about local organizations being invited to apply for a Vermont Outdoor Recreation Economic Collaborative grant (VOREC), one of only 37 communities invited to apply for such a grant. A total of 104 letters of interest in applying for the grants was submitted.

This year, thanks to federal stimulus funds, Vermont has a total of $5.1 million in grant funding to expend and the Mad River Valley Recreation District, with a coalition of other local organization, will submit a grant request for some $410,000 to be used to create a new trail hub and parking lot and visitor center at and behind the Localfolk Smokehouse as well as a bridge over the Mill Brook to connect cyclists and pedestrians to the trails in and around Dana Hill as well as those that run over to the Sugarbush Access Road.

Additionally, the project will create safe crossings to the Mad River Path’s trail and town sidewalks.

“Developing a destination for visitors, a year-round trail hub for access and information and a place to highlight the local trails collaborative partners as well as a place to show off what we’re doing in our community is going to be transformational. It will provide a hub of activity, restrooms and access to trails. At the chamber the most often-asked question is about restrooms and the second most asked question is how to get to the trails. This will also provide a really important parking lot and a large field for a new gathering site in our community. But the connectivity is what’s really important, it’s connecting the trail network with our downtown and puts people within walking and biking distance of 30 retail establishments and 22 restaurants and breweries,” Friedman said.

Friedman praised the generosity of John Morris, owner of the Localfolk Smokehouse, as well as the Laskowski family who is allowing the bridge to cross over the Mill Brook onto their land.

Bob Kogut, president of Mad River Riders, said that the bridge would be 88 feet long and 4 feet wide. It will be built well above the 500-year flood stage, he said.

“On the field side, it’s going to come in 6 feet off the ground, supported by posts within a grove of trees. There will be a treehouse-effect when you use that ramp to get on and off the bridge,” Kogut said.

Ross Saxton, director of the Mad River Path, explained plans to connect the south end of the Blue Stone parking lot, down the hill and around the corner to Dugway Road. Saxton said there is enough of a shoulder from the north end of the Blue Stone parking lot along Route 100 that an area could be marked off in cones for people to use to get far enough north so they can access the town’s sidewalk system.

“We’re setting ourselves up for the future so people can get everywhere by foot. They can park their car somewhere and walk or bike around. That’s the dream that a rural place like Waitsfield or Irasville is always striving for. We have the opportunity to achieve that within a handful of years,” Saxton said.

Friends of the Mad River is another partner in the group applying for the grant and director Corrie Miller said it was exciting to see stewardship values given a priority for the project. She also discussed plans for community visioning for recreation, something still in the planning phases that would help community members envision what a “gold standard trail network might look like.”

Waitsfield resident and community volunteer Charlie Hosford expressed concern about moving forward with plans that assume the current Route 100/17 intersection will remain as it is. He pointed out how dangerous it is, citing a fatal crash from the late 1980s that killed a local man.

He also warned against creating an ersatz trail from Blue Stone along Route 100 to the north as a temporary measure in hopes that the town would build a sidewalk and suggested that a trail through the woods and down a hill to connect the south end of the Blue Stone parking lot to Dugway Road is introducing bikers and walkers to come of the most dangerous parts of The Valley, namely the Route 100/17 and Bragg Hill intersections.

In response, Saxton said that the path association had developed the plans working with experts at VTrans and said the plan is to make that intersection safer and more accessible.

Now the intersection is back on the VTrans priority list, according to Alice Peal, a Waitsfield planning commissioner who was on the Zoom meeting. She suggested waiting before making plans that will impact the intersection.

The Route 17/100 intersection is now back on VTrans’ radar, after being off it since 2003. Prior to 2003 there was a concerted local effort to get that intersection reconfigured into something safer over the course of several years. Many options were developed and discussed and locally consensus for any particular plan did not coalesce.

The grant application is due at the end of this month. Applicants will find out whether funds have been awarded at the end of January. While the state has $5.1 million to award, the 37 applicants who were invited to proceed have submitted funding requests that total more than $12 million.