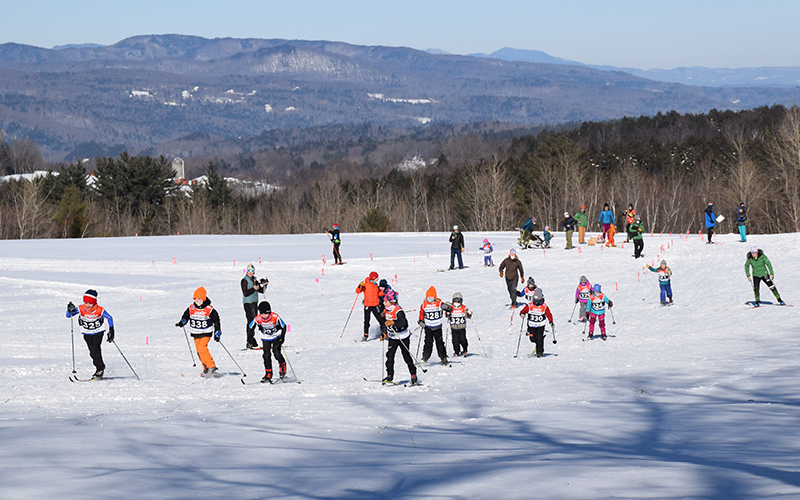 The Mad River Bill Koch league, a division of the Bill Koch Youth Ski League, has almost 100 kids signed up for its Nordic program this year, compared to a typical year of 60 or so participants. “We are seeing more interest” in Nordic skiing, said coach Justin Beckwith, leader of the local Bill Koch league and competitive program director of New England Nordic Ski Association (NENSA). He said COVID-19 has encouraged more people to get outside to recreate.

The group practices on Tuesday afternoons at Blueberry Lake and Ole’s Cross Country ski centers in Warren. Last weekend, the group hosted a race at Ole’s. Beckwith and his wife Brie have co-led the program for three years. The program is open to kids from kindergarten through eighth grade, though its current oldest participants are sixth graders. Beckwith said many of the kids who participate in the Bill Koch program go on to race at Harwood Union High School and beyond.

Despite such a strong showing of participants, the early season weather was not conducive to skiing. “It was a really tough start to the winter,” Beckwith said. He said the lack of natural snow in the early season emphasized the importance of snowmaking to Nordic skiing. He and Brie even encouraged kids to ski on grass in their yards to get used to those conditions.

Not all the kids who participate in the program race. “It’s not all about racing,” Beckwith said. “It’s about having fun on skis, recreation, getting outside.” While most participants are Valley residents, some do come from Lincoln and Hancock.

Justin Beckwith grew up ski racing in central New York and traveled to Vermont for races. “Vermont is really the hot bed of cross-country skiing in the East, even the world,” he said. “We raise some of the most well-rounded skiers you’ll find; they can ski anything.” As a high school student, he was recruited for a summer camp at Stratton Mountain and ended up spending his senior year of high school racing there. He followed his passion for skiing to the Nordic team at Middlebury College. After taking a few years off from skiing, he happened to meet Kerry Jackson, a teacher at Green Mountain Valley School (GMVS) in Waitsfield, who told him the school was looking for a Nordic coach. “I started coaching the next day,” he said. He spent more than eight years at the school before taking his role at NENSA.

“What’s really neat is I get to work with everybody throughout New England,” he said. He’s still connected to GMVS, which has hosted camps he’s worked. He’s also had the opportunity to travel the world with seven U.S. teams. “I’ve had some fantastic athletes,” he said, including racers who’ve reached the top 10 in NCAAs.

“One of the things we’re trying to do is grow low-key, fun racing events. We’re trying to give them exposure and skills to make it a lifetime sport. Anybody can do it. Get out there and enjoy it.”