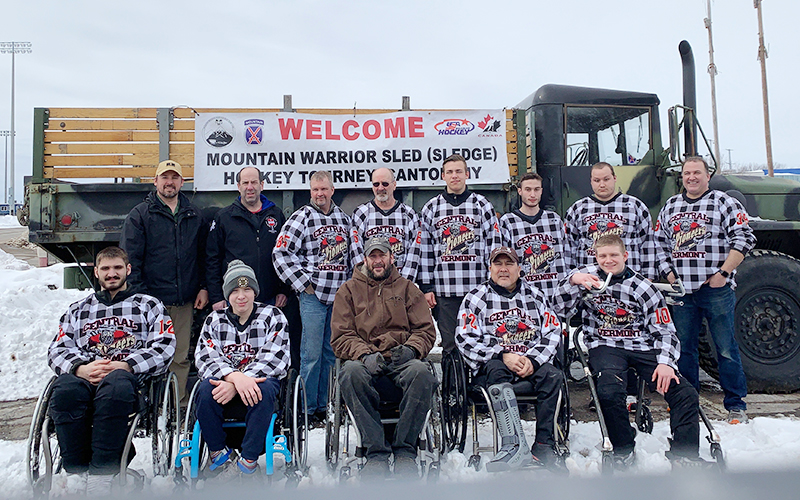 The Waitsfield-based sled hockey team, Central Vermont Pioneers, is back on the ice after a two-year COVID hiatus. Last weekend the team won the ninth annual Wounded Warriors tournament in Canton, New York. Team founder, player and spokesperson Troy Kingsbury said the local team was invited after several Canadian teams couldn't make it across the border.

"We ended up winning the entire tournament, the first time a U.S. team did that," he said.

And that was just the start of a big season for the team. March 18-20 the team will be in New Jersey at the Northeast Sled Hockey League championships, then they'll travel to Westfield, Massachusetts, where team members have been invited to participate in the New England Sled Hockey tournament which takes place April 1-3.

"And then - this is a first for us - we're flying to Pittsburgh to the U.S. National Disabled Festival on April 20 for four days of sled hockey. We'll be playing with teams from all over the country," Kingsbury said.

"It's a lot after being down for two years due to COVID. We really need to put in a lot of effort to gain steam. A lot of teams in the Northeast have diminished in their players. Our team has a lot of energy and we're working to grow it," he said.

Pre-COVID, the Central Vermont Pioneers competed regularly from October to March. The teams is self-funded, with the help of fundraisers and a GoFundMe page (https://www.gofundme.com/f/central-vt-pioneers-disabled-sled-hockey).

When traveling to tournaments, team members stay in AirBnbs or hotels.

In Canton last weekend, the team stayed in a place that was not accessible for all players which required the able-bodied players to assist others in getting in and out, Kingsbury said.

"Our team probably has more able bodies than a typical team because of the father/son relationships and sometimes we have siblings who play as well. It's a family and what we've tried to project is that family attitude," he explained.